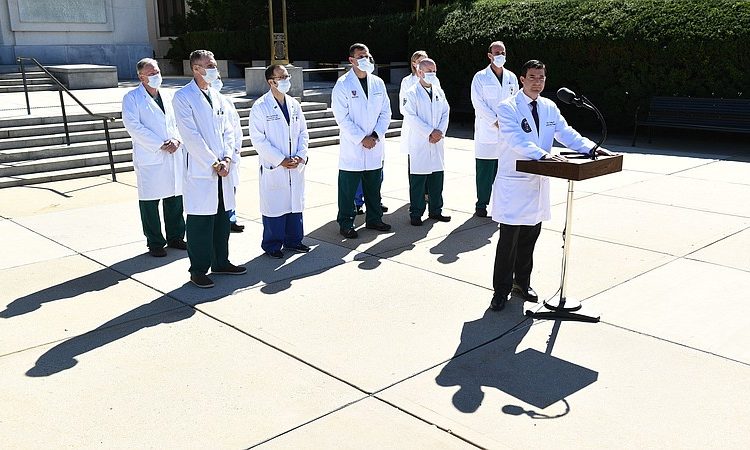 The medical team treating President Donald Trump for COVID-19 is monitoring the condition of his lungs after he received supplemental oxygen on Friday, but declined on Sunday to provide details of what they had seen.

Trump, 74, who was flown to Walter Reed National Military Medical Center outside Washington on Friday, has taken two doses of a five-day course of the intravenous antiviral drug Remdesivir, as well as the steroid dexamethasone, which is used in severe cases.

Dr. Sean P. Conley acknowledged that Trump’s blood oxygen levels had dropped in prior days and that he had run a high fever on Friday morning, admitting that the president’s condition had been worse than previously disclosed. Conley said Trump was improving on Sunday.

The briefing came the day after contradictory messages from the White House caused widespread confusion about the president’s condition.

Trump spent much of the year downplaying the risks of the COVID-19 pandemic, which has infected 7.4 million Americans, killed more than 209,000, and caused an economic downturn that has thrown millions out of work.

His illness has upended his re-election campaign as it seeks to fend off Democratic challenger Joe Biden in the final month of the race, and rattled financial markets. Several members of his inner circle have also tested positive for the disease, as well as three Republican members of the U.S. Senate.

Two members of the White House residence staff tested positive for COVID-19 a few weeks ago, and Trump’s “body man” aide, Nicholas Luna, has also tested positive, according to a source familiar with the situation.

The New Jersey Department of Health said on Sunday the White House had provided it with the names of more than 200 people who attended a Trump fundraiser at his golf club in Bedminster on Thursday, after the White House knew that adviser Hope Hicks had tested positive.

Asked what tests had revealed about the condition of Trump’s lungs, Conley replied: “There’s some expected findings, but nothing of any major clinical concern.”

“The expected finding is that he has evidence of pneumonia in the X-ray. If it was normal they would just say it is normal,” Adalja said.

Doctors said the president had a high fever on Friday morning but had not run a fever since Friday.

“He received his first dose of that yesterday and our plan is to continue that for the time being,” Garibaldi said.

Dexamethasone is shown in studies to improve survival for patients hospitalized with severe or critical COVID-19 who need extra oxygen. But it should not be given in mild cases since it can limit the body’s own ability to combat the virus, according to guidelines from the Infectious Disease Society of America.

Trump is also being given an experimental treatment, Regeneron’s REGN-COV2, as well as zinc, Vitamin D, famotidine, melatonin and aspirin, his doctors have said.

“Our plan for today is to have him eat and drink, be up out of bed as much as possible, to be mobile,” Garibaldi said.

Trump released a four-minute video on Saturday in which he said the “real test” of his condition will come over the next few days.

“Over the next period of a few days, I guess that’s the real test, so we’ll be seeing what happens over those next couple of days,” Trump said into the camera, looking tired and wearing a jacket and open-necked shirt.

He tweeted thanks to his supporters on Sunday morning and afternoon.

“I really appreciate all of the fans and supporters outside of the hospital,” Trump tweeted Sunday afternoon.

Differing assessments of Trump’s health from administration officials on Saturday left it unclear how ill the president had become since he tested positive for the coronavirus on Thursday night.

Conley commented on the contradictory assessments on Sunday.

“I was trying to reflect an upbeat attitude of the team and the president about the course his illness has had,” Conley told reporters on Sunday. “I didn’t want to give any information that might steer the course of illness in another direction and in doing so, it came off that we were trying to hide something, which isn’t necessarily true.”

A Reuters/Ipsos poll published on Sunday found Biden had opened a 10-point lead over Trump nationally, slightly wider than it has been for the past two months. Some 65% of Americans said Trump likely would not have been infected had he taken the virus more seriously – a view that half of registered Republicans polled supported. Some 55% said they did not believe Trump had been telling the truth about the virus.