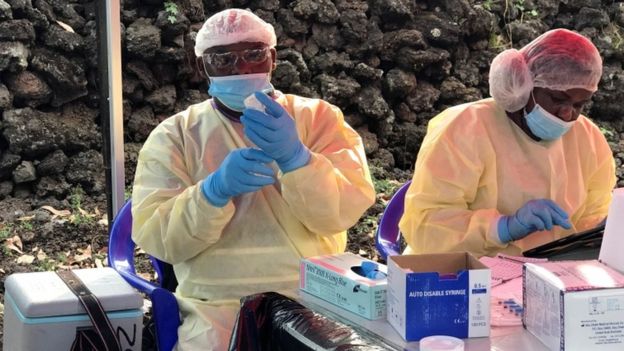 The numbers of people who have died in the current Ebola outbreak in the east of the Democratic Republic of Congo has reached the 2,000 mark, government figures show.

The health authorities have struggled to contain the spread of the virus.

Neighbouring Uganda said that a nine-year-old girl with Ebola who had crossed the border had died.

The World Health Organization has called the situation one of the world’s “most complex humanitarian crises”.

This outbreak, in the east of DR Congo, is the second largest on record with the number of cases now exceeding 3,000, according to the government.

In Uganda, the girl with Ebola was isolated and transferred to an Ebola treatment unit where she later died. She is reported to have crossed the border with her mother, who was put into an isolation unit until she can be repatriated.

Uganda has maintained largely successful screening centres along its border with DR Congo in an effort stop the outbreak crossing the frontier.

There were two Ebola cases in the country in June. A Ugandan man and his Congolese wife lost two sons after their return from a trip to DR Congo to see relatives.

In DR Congo, the health authorities, working with NGOs, have been vaccinating health workers and people who have been in contact with suspected Ebola cases, but it has been difficult getting the spread of the virus under control.

Insecurity in the east of DR Congo and people’s suspicions of treatments have hampered efforts.

About 200 health facilities have been attacked in the country this year, causing disruption to vaccinations and treatments. In one incident, family members assaulted health workers who were overseeing the burial of their relative.