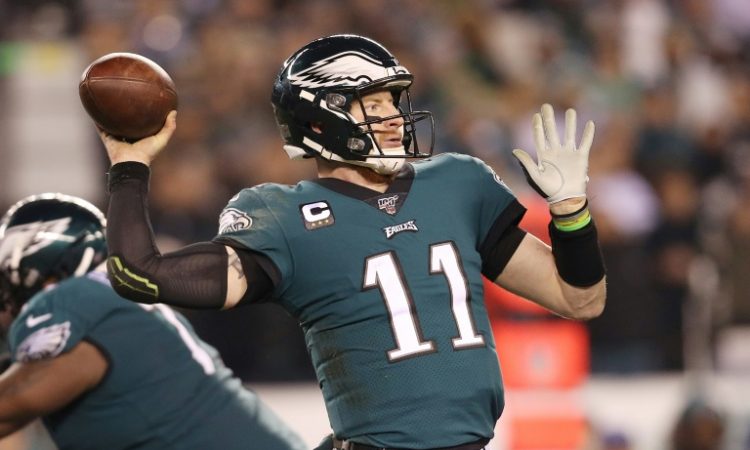 Philadelphia’s Carson Wentz threw for 319 yards and a touchdown Sunday as the Eagles won a gritty 17-9 home victory over Dallas, seizing command of their NFL playoff-berth battle.

The injury-hit Eagles improved to 8-7 but still need a victory next week over the New York Giants (4-11) to secure the NFC East division title and a playoff berth.

The Cowboys fell to 7-8 and need to beat arch-rival Washington (3-12) next week plus have the Eagles lose in order to reach the playoffs.

Wentz completed 31-of-40 passes without an interception and ran six times for 22 yards to spark the Eagles to their biggest win of the year despite an early rib injury that sidelined star tight end Zach Ertz.

“It was a huge one for us,” Wentz said. “Guys made plays. Defense down the stretch made great plays. Man this one feels good.

“Resilient bunch. Man goes down. Next man up. Guys keep believing. We never look down. We just keep going.”

Kai Forbath answered for Dallas with second-quarter field goals of 32 and 49 yards to lift the Cowboys within 10-6 at half-time.

Wentz drove the Eagles 80 yards in 10 plays late in the third quarter and Miles Sanders capped the march with a 1-yard touchdown run as Philadelphia took a 17-6 edge.

Forbath kicked another 49-yard field goal and Dallas drove 65 yards in 11 plays late only for Eagles cornerback Sidney Jones to break up Dak Prescott’s fourth-down pass to Michael Gallup in the end zone to foil the final Dallas threat.

“The sky is the limit for this team,” Eagles coach Doug Pederson said. “I’m so happy.”

The Baltimore Ravens clinched the top seed and a first-round bye in the American Conference playoffs with a 31-15 victory at Cleveland.

Most Valuable Player candidate Lamar Jackson threw for 238 yards and three touchdowns and ran 17 times for 103 yards as the Ravens improved to an NFL-best 13-2 and stretched their win streak to a club-record 11 games.

San Francisco (12-3), who beat the Los Angeles Rams on Saturday, would claim the top seed in the National Conference with a triumph next Sunday over the Seattle Seahawks (11-4), who lost 27-13 to Arizona.

The last American Conference playoff berth remains unclaimed after Pittsburgh and Tennessee both fell to 8-7 with losses.

Sam Ficken kicked second-half field goals of 37 and 42 yards to give the New York Jets a 16-10 triumph over visiting Pittsburgh, dimming the Steelers’ playoff bid.

Tennessee owns a tie-breaker edge on Pittsburgh for the last AFC playoff berth despite a 38-28 loss to New Orleans. The Steelers need success at rival Baltimore next week and the Titans to stumble at Houston.

The Oakland Raiders sustained their slim playoff hopes as Derek Carr threw for one touchdown and ran for another in a 24-17 victory at the Los Angeles Chargers.

The Raiders must beat Denver next week, have Pittsburgh and Tennessee both lose and have Indianapolis defeat Jacksonville to produce a playoff tie-breaker situation they can win involving four clubs at 8-8.