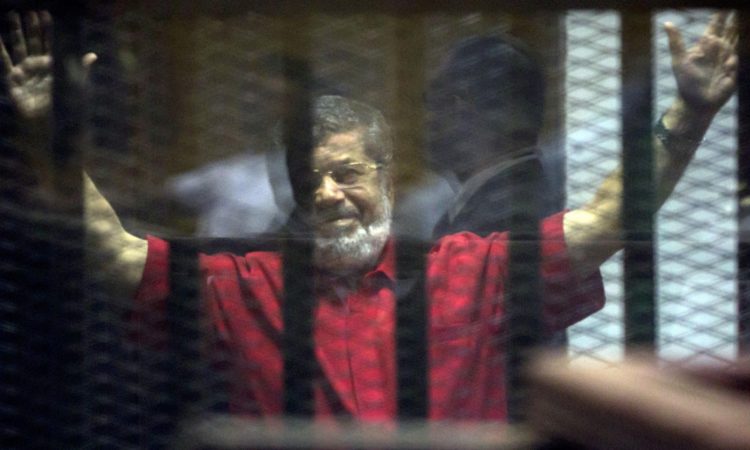 Egypt’s former President Mohammed Morsi, ousted by the military in 2013 after one year in office, has collapsed in a courtroom and died, officials say.

A top figure in the now-banned Islamist movement Muslim Brotherhood, Morsi had just spoken from a cage at a hearing on charges of espionage. State TV said the cause of death was a heart attack.

Morsi, who was 67, had been in custody since his removal after mass protests.

The Muslim Brotherhood said the death was a “full-fledged murder”.

Activists and his family had long said Morsi was not receiving treatment for serious health problems such as high blood pressure and diabetes, and was constantly being held in solitary confinement.

Morsi collapsed moments after addressing the court in Cairo over charges of espionage related to suspected contacts with the Palestinian Islamist group Hamas, which had close ties to the Muslim Brotherhood.

He spoke for some five minutes from a soundproof glass cage which officials said was designed to prevent him from disrupting proceedings. Morsi was pronounced dead in hospital at 16:50 local time (14:50 GMT) and an initial report showed no signs of recent injuries on the body, Egypt’s public prosecutor said.

Last month, his family said authorities had repeatedly denied access to him and that they knew little about the state of his health. During his time in prison, Morsi was allowed only three visits from relatives and was denied access to his lawyers or a doctor, according to human rights group Amnesty International.

His son Abdullah told the Reuters news agency he did not know the location of the body and that authorities were refusing to allow Morsi to be buried in his native Nile Delta province of Sharqiya.