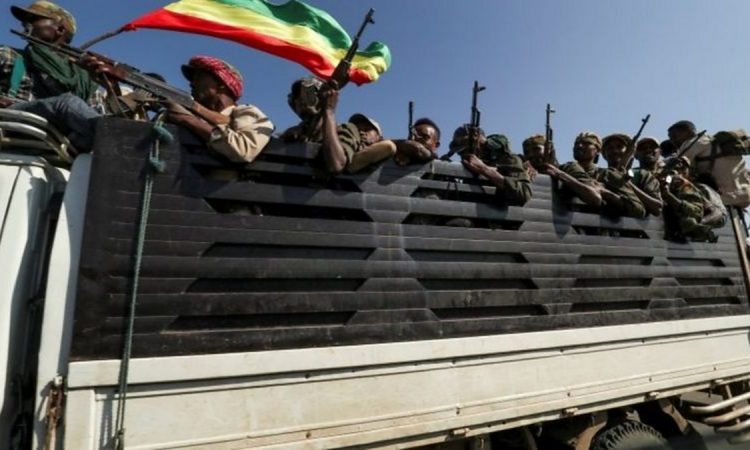 Ethiopia’s forces have captured two towns in the northern region of Tigray where soldiers loyal to the local political party are fighting the central government.

Tigray’s leader confirmed the losses but said it was a temporary setback and vowed to defeat the government.

Ethiopia’s prime minister has said that his army is advancing on the Tigrayan capital Mekelle.

Hundreds of people have reportedly died in two weeks of clashes.

Verifying information from Tigray is hard due to a blackout on most communications.

When Ethiopian Prime Minister Abiy Ahmed postponed a national election due to coronavirus in June, tension escalated between the two groups. The TPLF sees the central government as illegitimate, arguing Mr Abiy no longer has a mandate to lead the country.

The government accused the TPLF of attacking a military base to steal weapons, which the TPLF denied. In response, Mr Abiy ordered a military offensive, accusing the TPLF of treason.

Government forces seized the towns of Shire and Axum after a three-day deadline given by Prime Minister Abiy to Tigray’s forces to surrender expired on Tuesday.

TPLF leader Debretsion Gebremichael confirmed to a local TV station on Wednesday that his soldiers had lost control of the towns in the south and west of Tigray, but said it was temporary and vowed to defeat Mr Abiy’s forces.

“Let us mobilise our entire capacity,” he said, calling for all Tigrayans including children to join the “struggle”.

“Tigray is now a hell to its enemies. The people of Tigray will never kneel,” the TPLF said in a statement, according to Reuters news agency.

Ethiopian officials accused the TPLF of destroying four bridges close to the Tigray capital Mekelle, but the group denied the claims.

The prime minister suggested on Tuesday that the fighting was coming to an end, saying “the final critical act of law enforcement will be done in the coming days”.

At least 27,000 people have fled over the northern border to Sudan as the UN warned a “full-scale humanitarian crisis” was unfolding.

TPLF adviser Fesseha Tessema, a former Ethiopian diplomat, told the BBC that civilian sites in Mekelle were being bombed by federal forces.

“[The people of Tigray] haven’t done anything wrong, they are in their own homes, churches,” Mr Fesseha said.

The federal government has denied targeting civilians and said that air attacks are aimed at the Tigrayan military.