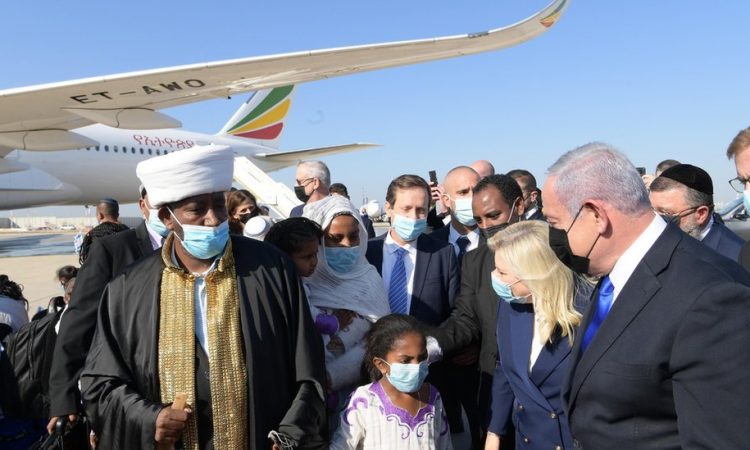 Hundreds of Ethiopian Jews have been airlifted to Israel – the first of several thousand waiting to emigrate there in a long-running saga.

It comes weeks after Israel announced plans to do so, after failing to implement a previous pledge to take in the community.

The immigrants are related to Ethiopian Jews brought to Israel decades ago in a series of secret operations.

But questions over their eligibility to settle there held up the process.

The issue gained greater urgency in recent weeks as fighting between the Ethiopian government and local forces in the Tigray region threatened to spread south to Gondar city, where most of the Jewish community are in transit camps.

“My wife Sarah and I stood there with tears in our eyes at the welcoming,” Mr Netanyahu said in a statement, “when we see the immigrants, our Ethiopian Jewish brothers, leave the plane… come down and touch the ground, the land of Israel.

“You waited so long to realise the dream and today it is being realised.”

Immigration Minister Pnina Tamano-Shata – herself an Ethiopian-born immigrant brought to Israel in a clandestine airlift in 1984 – went to Ethiopia to oversee Thursday’s transfer, dubbed Operation Rock of Israel.

The community, known as Falash Mura, are descendants of Jews who converted to Christianity – many under duress – in the late 19th Century. In recent decades they have identified as Jewish again, living their lives in accordance with the faith.

However, unlike the Ethiopian Jewish community – known as the Beta Israel – previously evacuated to Israel, Falash Mura do not fulfil the criteria for automatic right to Israeli citizenship due to uncertainties over their ancestral lineage according to Jewish law.

The issue dragged on for years, until the government pledged in 2015 to transfer the whole community by the end of 2020.

Although 16,600 Falash Mura have applied to emigrate to Israel, its interior ministry said this week, until now only 2,000 of those who qualified had been brought. The pace of the process has led campaigners to accuse the government of reneging on its promise.

About 100 more are expected to arrive on Friday, and the government says another approximately 1,700 will follow by the end of January 2021.

Ethiopian Jews were first brought to Israel from refugee camps in Sudan in a series of secret operations in the early 1980s by Israel’s Mossad intelligence agency on the orders of the then Prime Minister Menachem Begin.

Further operations followed, concluding with a mass airlift from Ethiopia in 1991.

The Ethiopian Jews’ integration in Israel has been challenging, with the community suffering disproportionately high levels of unemployment and poverty as well as discrimination, although their situation has shown signs of improvement in recent years.