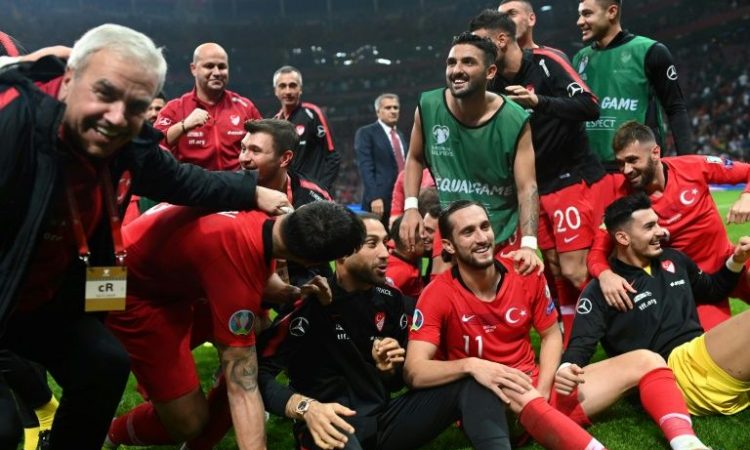 Turkey booked their place at Euro 2020 on Thursday after a goalless qualifying draw with Iceland which also sent world champions France to next year’s finals.

With two teams qualifying from Group H, leaders Turkey are four points ahead of third-placed Iceland with one match remaining after the stalemate in Istanbul, with France a point behind Turkey in second.

“We are so happy that we have qualified for the Euro. Now we have one more game to play, and then we’ll focus our clubs until March,” said Turkey’s Leicester defender Caglar Soyuncu.

Iceland needed to win to have any chance of qualifying thanks to their inferior head-to-head record with the French but will now have to hope they make the playoffs at the end of the qualifying phase.

“We came here four points adrift and Turkey are such a strong team. We did everything we could,” said Iceland forward Mikael Anderson.

“We came close to getting the result we wanted, but it wasn’t enough.”

Didier Deschamps’ France would have qualified for the Euros with a win over Moldova later on Thursday regardless of the result between Iceland and the Turks — who have been rejuvenated since Senol Gunes returned to take charge in February — and can now move top of the group.

Former national team goalkeeper Gunes took Turkey to third place at the 2002 World Cup during his first spell as manager between 2000 and 2004, and guided his team to qualification with relative ease, beating and drawing with France and losing only one match.

That upturn in form comes after a dreadful slump under previous coach Mircea Lucescu that saw Turkey fail to qualify for the last year’s World Cup in Russia and relegated to third-tier League C in the UEFA Nations League.

The hosts largely kept Iceland at bay in a match of few chances, but had to thank Merih Demiral for making sure of qualification when he brilliantly cleared Hordur Magnusson’s header off the line with eight minutes to go.

That was Iceland’s only shot on target of the whole match, and sparked a frantic finale as the away side pressed for a winner and Turkey looked to snatch the win on the break.

Both sides had good attempts blocked by defenders as the clock ticked down, and Yusuf Yazici almost won the match in dramatic style when his daring lob beat Hannes Halldorsson but grazed the bar.