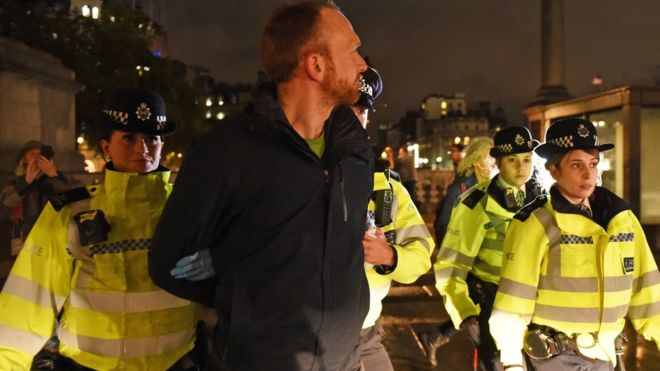 In a statement issued on Monday evening, the Metropolitan Police said demonstrators protesting in the capital after 21:00 BST could be arrested.

Extinction Rebellion said it would “let Trafalgar Square go” but added that the “International Rebellion continues”.

The protests, which began last Monday, have seen more than 1,400 arrests.

A number of demonstrations have been staged across the capital by the group, which is calling on the government to do more to tackle climate change. The protests were due to last two weeks.

On Monday evening, police began clearing protesters from Trafalgar Square, some of whom had glued themselves to the ground as they refused to leave.

Protesters gathered their belongings as police removed the last of the Extinction Rebellion demonstration
Earlier in the day, hundreds of protesters had targeted the City of London, blocking the crossroads outside the Bank of England.

The Met said there had been 1,445 arrests by 14:00 on Monday, with 76 people charged with offences including criminal damage and obstruction of a highway.