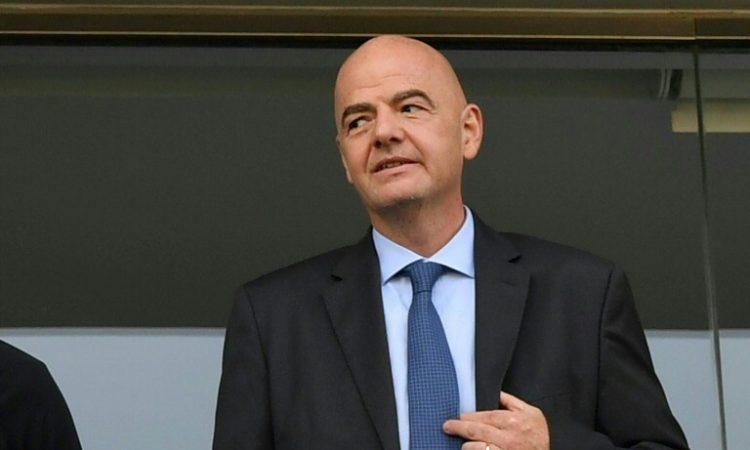 FIFA president Gianni Infantino said Sunday the problem of racism in Italian football has “not improved” after a Serie A match between Atalanta and Fiorentina was halted for several minutes because of racist abuse of Brazilian Dalbert.

Fiorentina defender Dalbert, 26, asked the referee to halt play after half an hour at the Stadio Ennio Tardini until a warning statement was read out by the stadium speaker to jeers and whistles from the Atalanta fans.

Play resumed after three minutes with visitors Fiorentina leading 1-0 after a goal from Federico Chiesa.

“In Italy the situation has not improved and this is serious,” Infantino, in Italy ahead of the FIFA Best Awards on Monday, told the Italian Rai2 channel.

“Racism is fought through education, condemning it, talking about it, we cannot accept racism in society and in football.

“We have to identify those responsible and throw them out of the stadiums, we need clear sentences, as in England, we must not be afraid to condemn the racists, we must fight them to the end.”

Since the beginning of the season, Inter Milan’s Belgian striker Romelu Lukaku and AC Milan’s Ivorian midfielder Franck Kessie have been targeted by monkey cries during league games without any sanction being taken.

Last season, Blaise Matuidi, Kalidou Koulibaly and Moise Kean were also victims of the problem which has been recurring for years in Italy. On the pitch, Atalanta rescued a 2-2 draw with two late goals to avoid a second consecutive defeat after their 4-0 Champions League thrashing at Dinamo Zagreb in midweek.

Elsewhere, Fernando Llorente scored a brace as Napoli eased past Lecce 4-1 to keep in touch with leaders Inter Milan and second-placed Juventus, while Edin Dzeko struck a stoppage-time winner for Roma.

Spaniard Llorente, who scored in Napoli’s midweek 2-0 win over Champions League holders Liverpool, grabbed the opener on 28 minutes at the San Paolo Stadium. He added a late fourth for Napoli eight minutes from time.

“It was a game that could have been a trap after the high of Liverpool, but the many changes helped us,” said Napoli coach Carlo Ancelotti.

Arkadiusz Milik started up front alongside Llorente, and the Polish striker’s assist contributed to the Spaniard’s opener.

Lorenzo Insigne scored Napoli’s second goal from the spot five minutes before the break, at the second attempt after Lecce’s goalkeeper left his line prematurely before he saved the first.

Fabian Ruiz scored Napoli’s third on 52 minutes before Marco Mancosu pulled a goal back for Lecce after an hour — the eighth conceded by Napoli in four league matches.

Ancelotti’s side sit third, three points behind leaders Inter Milan, who are on maximum points after four games, after their 2-0 Milan derby win on Saturday.

Champions Juventus won 2-1 at home against Verona and are second with 10 points from four games.

“Juve still look to be under construction,” warned Ancelotti.

“Knowing (coach Maurizio) Sarri and his teams, I think he is still fine-tuning things. Inter are already up and running, Juventus will get there in the coming matches.”

In Bologna, Dzeko’s late winner sealed a 2-1 win for 10-man Roma, who are fourth, a point behind Napoli.

The Romans were hit by Gianluca Mancini’s sending off on 85 minutes, but Dzeko headed home a Lorenzo Pellegrini cross to get the winner deep into injury time.

City rivals Lazio are fifth after beating Parma 2-0 with goals in either half from Ciro Immobile and Adam Marusic.

Sampdoria moved off the bottom of the table, earning their first points as Manolo Gabbiadini’s goal sent Torino crashing to their second consecutive league defeat.

The Genoa club’s place at the foot of the table was taken by Fiorentina, the only team without a win.