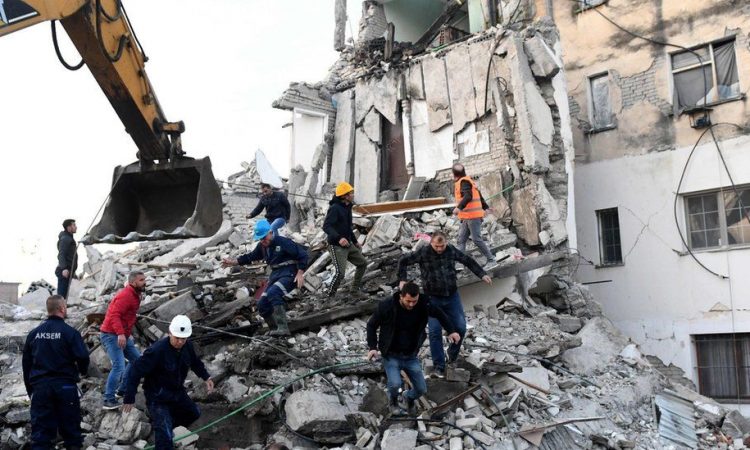 The death toll from the most powerful earthquake to strike Albania in decades rose to 40 on Thursday after more bodies were pulled from the wreckage overnight in a tragedy that has wiped out whole families.

The 6.4 magnitude earthquake rattled the Balkan state while people were sleeping just before 4:00 am (0300 GMT) on Tuesday, razing buildings and trapping victims beneath the debris in towns near the Adriatic coast.

Rescue teams were still shovelling away massive chunks of collapsed apartments and hotels in the coastal city of Durres, where nearly 30 buildings were badly damaged.

Search efforts ceased Thursday in the other hard-hit town of Thumane, where the defence ministry said no more bodies were to be found after more than 20 were pulled out.

During the night, emergency workers uncovered the bodies of a mother and son from the Reci family, found in an embrace.

They were crushed by the weight of a collapsed six-storey building in Durres.

The whole family has now perished in the quake, with the bodies of the father and daughter pulled out the day before, according to Ilir Duka, an Albanian rescuer at the scene.

Similar tragedies have befallen other families as the pre-dawn earthquake tore down their buildings.

Loved ones have watched on in horror as rescuers pulled out bodies covered in a grey film of dust, many in their pyjamas.

On Tuesday a woman was heard crying out from inside a wrecked building, where she was stuck inside with a dead child. She was eventually rescued but later died in hospital.

Thousands have also been displaced, either because their homes were severely damaged or still unsafe because of the continuing aftershocks.

On Wednesday night authorities in Durres moved those who had been sleeping in tents to hotels and a sports centre.

Prime Minister Edi Rama has promised to rehouse the newly homeless by next year.

Illegal construction is rife in Albania, one of Europe’s poorest countries.

Many buildings lack proper permits and do not adhere to safety codes.

The earthquake was the deadliest in several decades in Albania, which lies near a tectonic fault line.

Earthquakes are relatively common in the Balkans because of the movements of two large tectonic plates, the African and Eurasian, and the smaller Adriatic micro-plate.