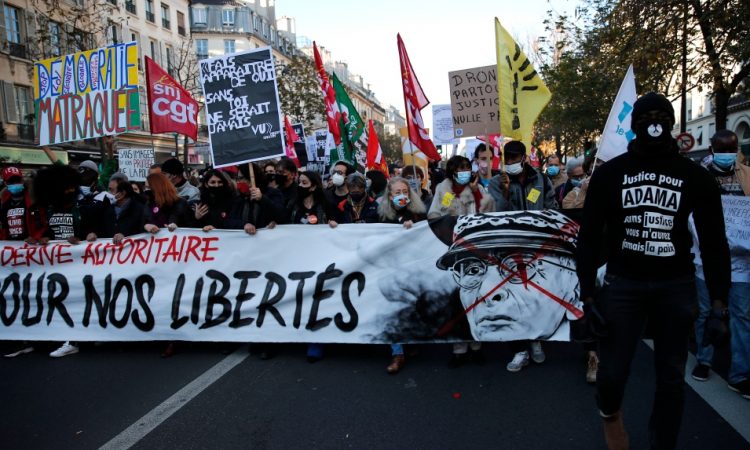 French police have fired tear gas at protesters rallying in Paris against a bill that would make it a criminal offence to film or take photos of police with malevolent intent.

Clashes began after some in the crowd threw stones and fireworks at the police. Cars were set on fire and barricades erected in the capital.

But the government says it will help protect officers from online abuse.

On Saturday, demonstrations were also being held in Bordeaux, Lille, Montpellier, Nantes and other cities across France.

The images, which show Michel Zecler being kicked and punched at his Paris studio, have shocked the nation.

President Emmanuel Macron described the incident as “unacceptable” and “shameful”, demanding quick government proposals how to rebuild trust between police and citizens.

The officers seen in the video have since been suspended and are under investigation.

Separately, the government has ordered police to provide a full report after they violently dismantled a makeshift migrant camp in Paris earlier this week, clashing with migrants and activists.

In Paris, about 46,000 people gathered in central parts of the capital, according to the interior ministry.

The majority marched peacefully, but small groups clashed with police deployed in the city.

Nine arrests were made later on Saturday, the authorities said.

The bill was backed last week by the lower house of parliament, and is now awaiting senate approval.

Article 24 of the proposed legislation makes it a criminal offence to publish images of on-duty police officers with the intent of harming their “physical or psychological integrity”.

The government argues that the bill does not jeopardise the rights of the media and ordinary citizens to report police abuses – and is only aimed at giving protection to police officers.

But opponents say that without such images, none of the incidents which took place over the past week would have come to light.

In the face of growing public criticism, Prime Minister Jean Castex said on Friday he would appoint a commission to amend Article 24.