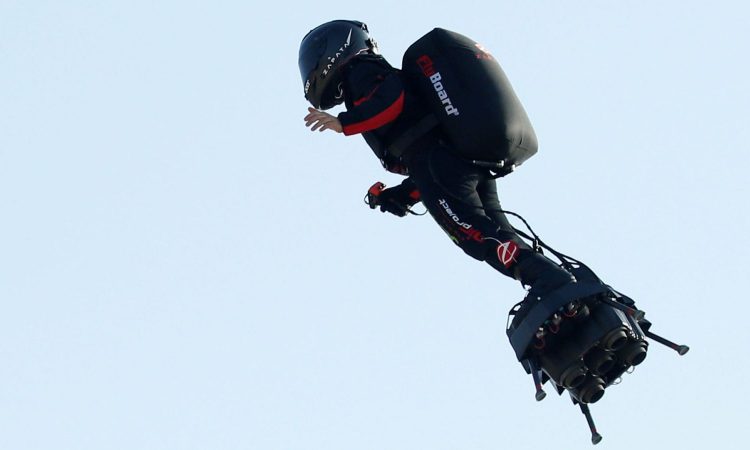 A French inventor has failed in his attempt to cross the English Channel on a jet-powered flyboard.

Franky Zapata, a former jet-ski champion, had been hoping to cross from northern France to southern England in just 20 minutes.

But the 40-year-old fell into the water halfway across as he tried to land on a boat to refuel.

He took off from near Calais on Thursday morning and was heading for St Margaret’s Bay in Dover.

Mr Zapata was not injured when he fell.

“It is a huge disappointment,” a member of his team told France’s BFM TV shortly after the flight. “He must have missed the platform by just a few centimetres.”

“We practiced this manoeuvre dozens of times in heavier seas,” he added.

The attempt took place exactly 110 years since Louis Blériot made the first powered flight across the Channel in 1909.

Mr Zapata set off from the beach at Sangatte, near Calais, at about 09:00 local time (07:00 GMT) on Thursday. The exact timing was dependant on the weather conditions and shipping traffic.

Crowds gathered at the beach to watch the attempt. Shortly after setting off, Mr Zapata disappeared from view as a helicopter followed closely behind him.

But just minutes later it was announced that he had failed.

Mr Zapata received widespread attention following the annual Bastille Day parade in Paris earlier this month, when he took part in a military display on his futuristic flyboard.

The invention, which is about the size of a skateboard, is powered by five small jet engines and fuelled by kerosene which is kept in the rider’s backpack.