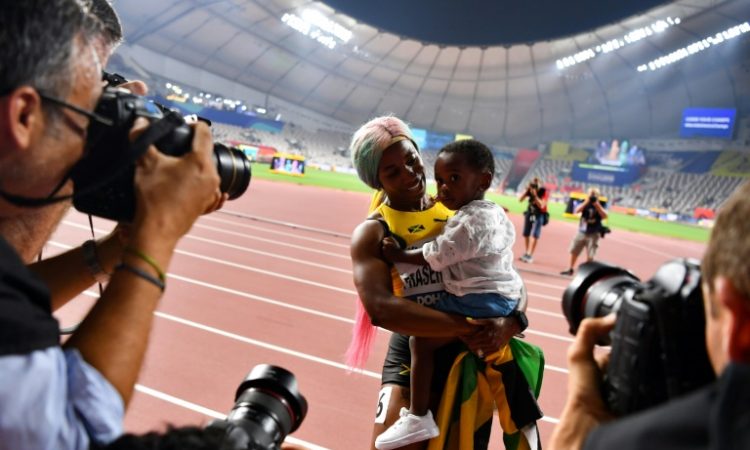 The 32-year-old — also a two-time Olympic champion — coasted to an impressive victory in a world leading time for the year of 10.71 seconds.

Fraser-Pryce — who had dyed her hair a multi-coloured mix — punched the air in front of the Jamiacan team seated in the stands before taking a national flag from them.

She collected her two-year-old son Zyon — he was born the day after the 2017 championships had finished which prevented her from defending her title in London — and paraded with him round the track sadly in front of largely empty stands.

Fraser-Pryce will now bid to become the first woman to achieve a second world sprint double in the 200m having pulled that off in Moscow in 2013.

Her path may have been eased somewhat by the withdrawal from the 100m final by two-time defending champion Dafne Schippers, who made it to the warm-up track but no further.

Another of her rivals, compatriot Elaine Thompson will seek to gain her revenge after finishing just outside the medals on Sunday in fourth spot.

A new champion was assured when name defending titleholder Tori Bowie failed to turn up for her semi-final on what was a disastrous evening for the American quartet.

National champion Teahna Daniels was the only one to reach the final and she finished seventh and last.