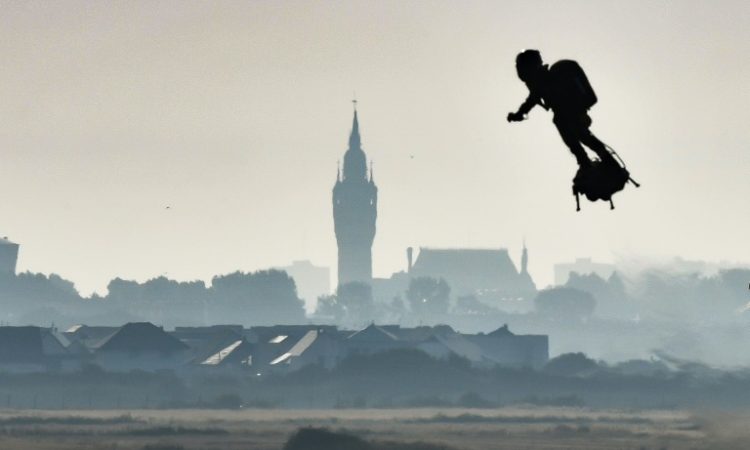 A French daredevil who spent years developing a jet-powered hoverboard zoomed across the English Channel on Sunday, fulfilling his quest after pulling off a tricky refuelling manoeuvre that cut short his first attempt 10 days ago.

Franky Zapata blasted off on his “Flyboard” from Sangatte on the northern coast of France at 8:17 am (0617 GMT) for the 35-kilometre (22-mile) trip to St. Margaret’s Bay in Dover.

Escorted by three helicopters, he glided across the water in the early morning light and landed 22 minutes later in the picturesque bay, to the applause of dozens of onlookers and journalists.

He said the indicators in the visor of his helmet showed he raced over the busy shipping lane at a speed of 160-170 km/h (100-105 mph), doing zig-zags as he neared the coast to try to ease the fatigue in his legs.

“It’s an isometric exercise for the thighs, so it burns — it’s quite hard. But you recover quickly, it’s not like riding a bicycle,” he said.

Minutes after descending from the metal platform where he landed his craft, Zapata had broken down in tears of emotion while talking on the phone to his son, who could be heard saying, “Dad, you’re the best!”

Zapata, a 40-year-old former jet-ski champion, made his first attempt on July 25, to coincide with the 110th anniversary of Louis Bleriot’s historic first crossing of the Channel by plane.