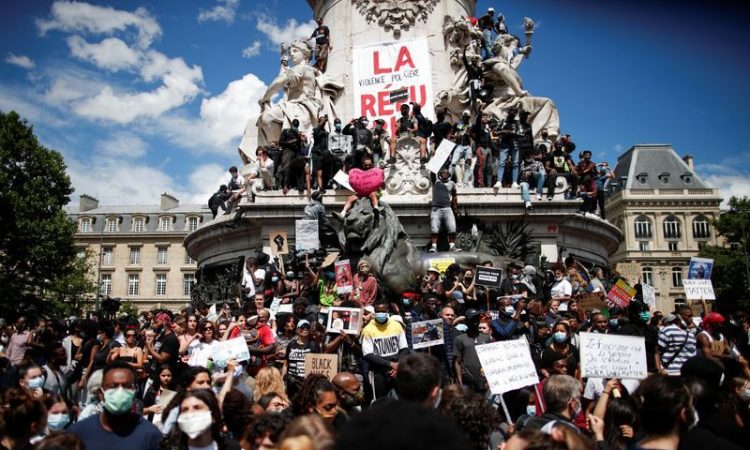 Thousands marched in cities around the world for a second week of rallies Saturday to support the US Black Lives Matter movement, but also to highlight racism and police brutality in their own countries.

There were rallies in cities across Europe, with thousands demonstrating in several French cities, and clashes breaking out in Paris and Lyon.

The weeks of historic demonstrations have been ignited by the May 25 killing of African American George Floyd by a police officer — the latest in a long line of unarmed black men being killed by white law enforcement in the US.

His agonising death as the officer knelt on his neck was filmed by bystanders and swiftly went viral, triggering fury first in the US and then around the world.

The mass unrest has forced an unprecedented global conversation on the legacy of slavery, European colonialism and white violence against people of colour, as well as the militarisation of police in America.

Police stopped protesters in Paris Saturday from marching through the capital, firing tear gas after some demonstrators pelted them with projectiles.

In the southeast city of Lyon, police used water cannons and tear gas at the end of a demonstration attended by about 2,000 people.

The Paris demonstration was called by a pressure group campaigning for justice for Adama Traore, a young black man who died in police custody in 2016.

She drew a direct parallel between Floyd’s death in the US city of Minneapolis and that of her brother, and renewed her call for a full investigation into his killing.

Amnesty International called in a statement for “a systemic reform of police practices” in France.

The rallies came at the end of a week when France’s police watchdog revealed it had received almost 1,500 complaints against officers last year — half of them for alleged violence.

Interior Minister Christophe Castaner on Tuesday promised “zero tolerance” of racism in law enforcement, saying it is clear some officers “have failed in their Republican duty”.

Castaner’s comments prompted several dozen policemen to gather with their patrol cars at Paris’s Arc de Triomphe on Saturday night, throwing down their handcuffs in protest.

In London, far-right protesters clashed with police in the city centre after gathering to challenge people demonstrating against racism.

Thousands of people defied coronavirus restrictions to assemble in and around Parliament Square, requiring a “major” policing operation, said the Metropolitan Police Service.

Television footage showed some agitators throwing punches, bottles and smoke bombs at officers as well as fighting with rival protesters.

Prime Minister Boris Johnson condemned the violence, saying “racist thuggery has no place on our streets”.

Police said they arrested more than 100 people in the capital, and six officers suffered minor injuries.

Anti-racism protests went ahead in other British cities, including Brighton in the south and Liverpool in the north.

Thousands marched in several cities across Switzerland, with the largest in Zurich, where 10,000 people turned out. Police said one officer was hurt after a few hundred hard-left activists there began throwing projectiles. They made several arrests.

Earlier in the week, around 10,000 marched against racism in Geneva.

In Germany, around 2,000 rallied in the southern city of Stuttgart, the DPA news agency reported. In the north, another 500 turned out in Lubeck and 250 in Hamburg. There were no reports of any trouble.

In Australia, thousands turned out in several cities for the second weekend running, despite coronavirus restrictions. The biggest was in the Western Australian capital Perth.

Many demonstrators carried signs such as “Stop deaths in custody” and “White Australia stop lying to yourselves”, highlighting the deaths of more than 400 indigenous people in custody over the last three decades.

Smaller protests for Aboriginal rights were held in Darwin, capital of the Northern Territory, and towns in neighbouring Queensland — both regions with numerous indigenous communities.

In Asia, hundreds gathered in a Taipei park with some holding signs with slogans such as “This is a movement, not a moment”. They held eight minutes of silence to remember Floyd, who was pinned to the ground by the white officer’s knee on his neck for eight minutes and 46 seconds.

Dozens also marched through the rain in Tokyo.

In Canada, officials in the eastern province of New Brunswick announced Saturday that they had opened an investigation into the fatal police shooting of a 48-year-old indigenous man, the second such incident this month.