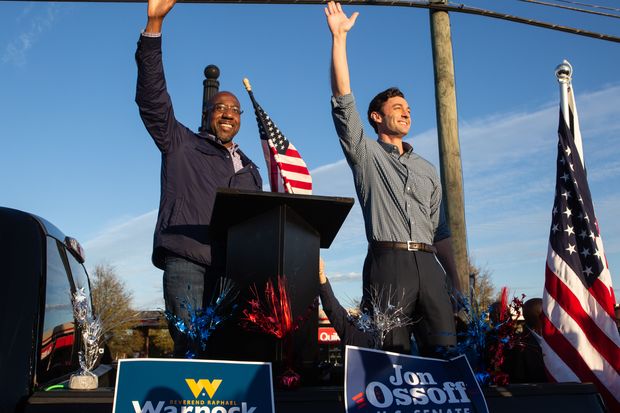 The Democratic Party of US President-elect Joe Biden has won control of the Senate – and of Congress overall – with two victories in the state of Georgia.

Democrats will control the Senate, the House of Representatives and the White House for the first time since 2009.

An estimated four million Georgians turned out to vote in the run-off election.

The result is a severe blow for outgoing Republican President Donald Trump.

The Georgia election was rerun because none of the candidates in the November general election achieved the 50% needed for victory under state rules.

Mr Warnock, a Baptist pastor, becomes the first black senator for Georgia – a slavery state in the US Civil War – and only the 11th black member of the Senate in US history.

Mr Warnock paid tribute to his mother, Verlene, who as a teenager worked as a farm labourer.

With the result in Georgia, the Democrats and the Republicans will now each have 50 seats in the Senate, the upper house of Congress.

However, the incoming Democratic vice-president, Kamala Harris, will preside over the Senate once she takes office and will have the tie-breaking vote.

This gives the Biden administration a greater chance of achieving its agenda on issues such as healthcare and climate change.

Both races were very tight. Mr Warnock defeated Senator Kelly Loeffler by a projected 50.7% to 49.3%, figures from the Associated Press indicate.

Ms Loeffler, who was appointed to the Senate last year to fill a vacancy, is a Trump loyalist.