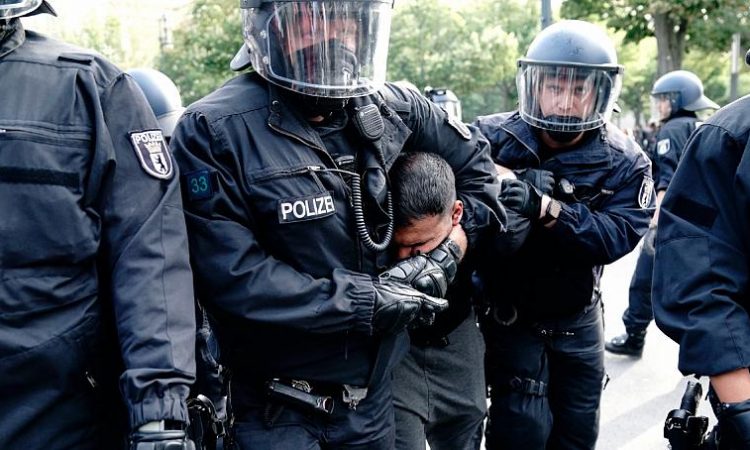 An attempt to storm Germany’s parliament during Saturday’s big Berlin protest against Covid-19 restrictions has been condemned by politicians across the political spectrum.

Demonstrators, many with far-right sympathies, broke through a cordon and ran up the steps of the Reichstag before police dispersed them.

The interior minister said there should be “zero tolerance” for such behaviour.

Some 38,000 turned out for the wider, largely peaceful Berlin demonstration.

Demonstrators bearing the flag of former imperial Germany – used by the Reichsbürger (Reich Citizens) far-right group – overcame a handful of police to run to the building entrance.

Scuffles broke out and the protesters were then overcome by police using pepper spray. Several people were arrested.

Police rejected criticism of their small deployment, saying they could not “be everywhere all the time”.

“The Reichstag is the domain of our parliament and the symbolic centre of our democracy. It is unbearable that troublemakers and extremists misuse it for their own purposes,” said Interior Minister Horst Seehofer.

President Frank Walter Steinmeier condemned “an unbearable attack on the heart of our democracy”.

“Those angered by our coronavirus measures or who doubt their necessity can do so openly, in protests. But my tolerance ends when protesters hitch themselves to the wagon of enemies of democracy and political rabble-rousers.”

Vice-Chancellor Olaf Scholz, from the Social Democrats, was one of several to condemn the display of far-right and German imperial symbols.

The protest had originally been banned but a court eventually allowed it to go ahead on condition that coronavirus measures such as mask-wearing and social-distancing were adhered to.

In all, 300 people were arrested at various locations, 200 after right-wing agitators threw stones and bottles near the Brandenburg Gate.

Police ordered the dispersal of the protest as the day went on because those taking part were failing to observe coronavirus rules.

Protesters were closely packed in places, and sat together on the ground at one point.

Among those arrested was cookery author and conspiracy theorist Attila Hildmann, who had addressed crowds through a loudspeaker.

Although Germany has so far not seen the wave of cases affecting some parts of Europe, its infection rate has been growing. New case numbers are reaching highs last seen in April.

The demonstration was called by the Stuttgart-based movement Querdenken 711 (or Lateral Thinking 711). The group has more than 16,000 followers on Facebook and communicates largely through encrypted messaging service Telegram.

It believes that coronavirus regulations infringe on basic rights and freedoms enshrined in Germany’s constitution and wants them to be lifted.

Participants also included families and children. Some people have said they just want the right to protest.

Counter-protests against the main march also took place, with about 100 people at one rally. “You are marching with Nazis and Fascists,” shouted some participants, according to broadcaster RBB.