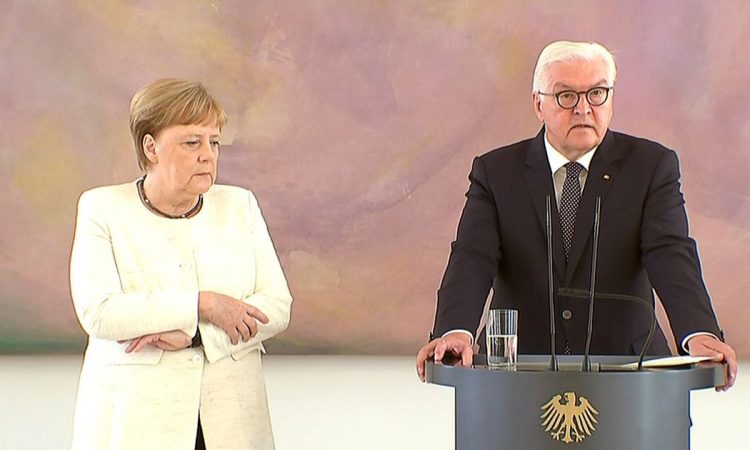 German Chancellor Angela Merkel was seen trembling once again during a ceremony in Berlin on Thursday, eight days after a similar incident.

Video showed Mrs Merkel, 64, gripping her arms as her body was shaking on Thursday. After about two minutes, she looked steadier and shook hands with the new justice minister.

She was offered a glass of water, but did not drink it.

Mrs Merkel had blamed the previous incident on dehydration.

Her spokesman said she would set off for Japan as planned at lunchtime.

“All is going ahead as planned. The federal chancellor is fine,” spokesman Steffen Seibert said.

German news agency DPA said that despite the spell of very hot weather it was cool during the ceremony in Bellevue Castle, where President Frank-Walter Steinmeier was presenting Justice Minister Christine Lambrecht.

Last time, Mrs Merkel trembled while standing next to Ukraine President Volodymyr Zelensky in the hot sunshine. She said she had felt revived after drinking some water.

On Thursday she attended Ms Lambrecht’s inauguration briefly in parliament – the Bundestag – then left. She is scheduled to fly to Japan for the G20 summit.