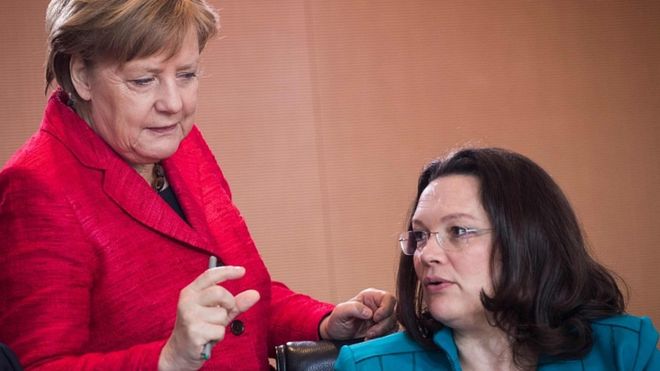 German Chancellor Angela Merkel says her coalition government will continue despite resignation of the leader of its junior partner, the Social Democratic Party (SPD).

Merkel said she respected the “far-reaching” decision by Andrea Nahles.

Ms Nahles resigned after her centre-left party came third, behind Mrs Merkel’s Christian Democrats (CDU) and the Greens, in the European elections.

She had been criticised by the SPD’s left for remaining in the coalition.
Nahles became SPD leader in April 2018, replacing Martin Schulz who also resigned following the party’s poor performance in elections. She was expected to run for the position again and her resignation took analysts by surprise.

The coalition between the CDU and the SPD is due to last until federal elections in 2021, but Ms Nahles’s resignation could lead to the SPD leaving, triggering a snap poll.