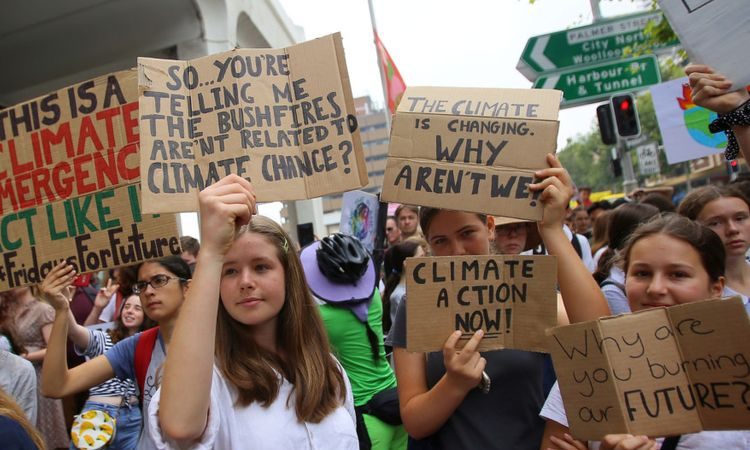 Protesters across Asia kicked off a fresh round of global demonstrations against climate change on Friday, with bushfire-ravaged Australia taking the lead.

Hundreds of people gathered outside the offices of the conservative Liberal party, as protesters in several Asia-Pacific cities heeded the call to action from 16-year-old climate change campaigner Greta Thunberg.

The protests have taken on extra urgency in Australia — the country’s southeast has been devastated by hundreds of damaging bushfires in recent weeks.

Brandishing placards that read “You’re burning our future” and chanting “we will rise”, the demonstrators turned out as Sydney was again enveloped in toxic smoke caused by the fires that have blanketed the city for much of the last month.

“My home town was on the frontlines,” said student Sam Galvin who was protesting in Melbourne. “That kind of shocked me into realising that this is something that is happening and it’s time I do something about it.”

Six people have died and hundreds of homes have been destroyed in the crisis, which scientists say has been worsened by rising temperatures.

Drought and unseasonably hot, dry and windy conditions have fuelled the unprecedented blazes.

The target of the protesters’ ire was Prime Minister Scott Morrison, who has angrily denied any link between the fires and climate change while defending his support for fossil fuels.

“Our government’s inaction on the climate crisis has supercharged bushfires,” said school strike leader Shiann Broderick. “People are hurting. Communities like ours are being devastated. Summer hasn’t even begun.”

Australia, with a population of 25 million, has low carbon emissions compared with the planet’s biggest polluters, but is one of the world’s leading coal exporters.

“The suggestion that (in) any way shape or form that Australia, accountable for 1.3 percent of the world’s emissions, that the individual actions of Australia are impacting directly on specific fire events, whether it’s here or anywhere else in the world, that doesn’t bear up to credible scientific evidence,” Morrison claimed earlier this month.

Protests also took place in Tokyo, where hundreds marched through the teeming Shinjuku district to raise awareness of the issue.

“I feel a sense of crisis because almost no one in Japan is interested” in climate change, said 19-year-old student Mio Ishida.

“I was really inspired by Greta’s actions” she said. “I thought if I didn’t act now, it would be too late. I wanted to do something I could do.”

In Delhi, about 50 school and college students staged a march to the environment ministry in the world’s most polluted capital, carrying placards and chanting slogans demanding that the government declare a climate emergency.

The latest demonstrations come as 200 nations prepare to gather in Madrid next week for a 12-day UN climate conference.

The meeting will focus largely on finalising the “rulebook” for the 2015 Paris climate treaty, which becomes operational in 2021.

Scientists have warned that efforts to cap warming to 1.5 Celsius are failing, and that carbon emissions — which are on the rise — would need to fall 7.6 percent a year to meet the target.

The UN has reported that greenhouse gas levels in the atmosphere, the main driver of climate change, hit a record high last year.

The organisation has also warned that global temperatures are on pace to rise almost four Celsius by the end of the century — an increase that could make some places virtually uninhabitable.