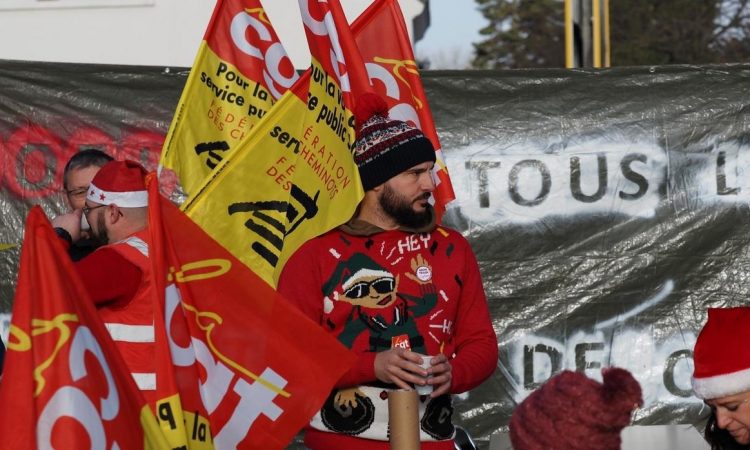 Christmas Eve 2019 was an unusually gloomy one for France, as the 20th day of a transport strike left many scrambling Tuesday to reach their loved ones for the traditional family feast, while others simply gave up.

The protest against pension reform has led to thousands of trains being cancelled or delayed, with taxis, ride-sharing services and car rental agencies unable to make up the shortfall.

“We’re not sure what to do,” said Joel Rossignon, 66, visiting Paris from the east of France to spend Christmas with his son, who lives in a far-flung suburb of the capital to which there will be none of the usual trains on Tuesday evening.

“We even tried to book a taxi, yesterday already, but there were none,” he said, standing with his suitcase on the street.

Kady Dao, 23, said she will stay at home in a suburb southwest of Paris with her nine-month-old daughter, as her usual public transport route has been cut off. “I have no choice.”

Negotiations with unions last week failed to find middle ground, and strikers vowed there would be no holiday truce unless the government scraps its plan to merge the country’s 42 pension schemes into one.

Since it started on December 5, the strike has hit daily commuters hard — especially around Paris and other large cities — and is now impeding tens of thousands of ticket holders who had planned to spend the festive season with family or friends.

Between a third and two-thirds of trains to some European destinations were running. And in the capital, six of 16 metro lines were closed, eight provided a much-reduced service, and only two — which are driverless — functioned as usual.

For suburb dwellers hoping to spend Christmas in the City of Light, there was bad news too. The SNCF will close several railway lines Tuesday afternoon, with some reopening Wednesday late morning, and others only Thursday.

The government’s pension overhaul, which it says would create a fairer system, would see some public employees — notably railway staff — lose early-retirement benefits.

But workers baulk at the inclusion of a so-called “pivot age” of 64 until which people would have to work to earn a full pension — two years beyond the official retirement age.

“This is horrible. These three weeks have been hard for me,” said Ristic Nevena, 29, who works as a manager in Paris, and travels daily from Montfermeil about 17 kilometres (10.5 miles) away.

She is obliged to take a different train from her usual one, with many inter-connections, making her daily commute three or four hours longer.