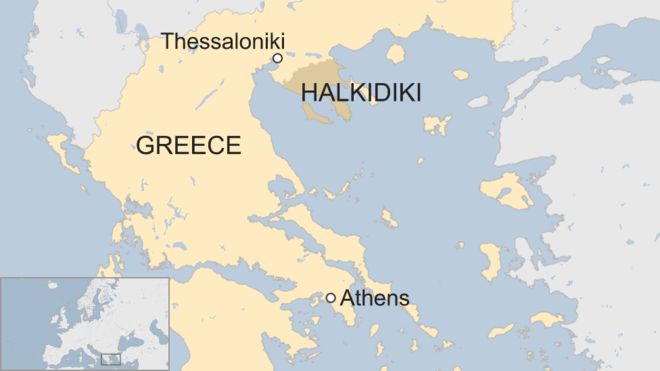 Six tourists have been killed and at least 30 other people injured in a violent storm that swept across a region of northern Greece.

A Czech couple died when their caravan was blown away, and two Romanians and two Russians were also killed.

A state of emergency was declared and more than 100 rescue workers deployed.

Charalambos Steriadis, head of civil protection in northern Greece, described it as an “unprecedented phenomenon”.

The storm followed a spell of very hot weather in Greece with temperatures soaring to 37C (98F) over the past two days.

“It is the first time in my 25-year career that I have lived through something like this,” said Athansios Kaltsas, director of the Nea Moudania Medical Centre which treated many of the injured.

A witness quoted by broadcaster ERT said the freak storm had lasted only for about 20 minutes.

A Romanian woman and her child were killed when the roof of a restaurant collapsed at Nea Plagia, officials say, while a Russian man and his son were killed by a falling tree near their hotel in the seaside resort of Potidea.

Greece’s minister for citizen protection, Michalis Chryssohoidis, is due to visit the region on Thursday.