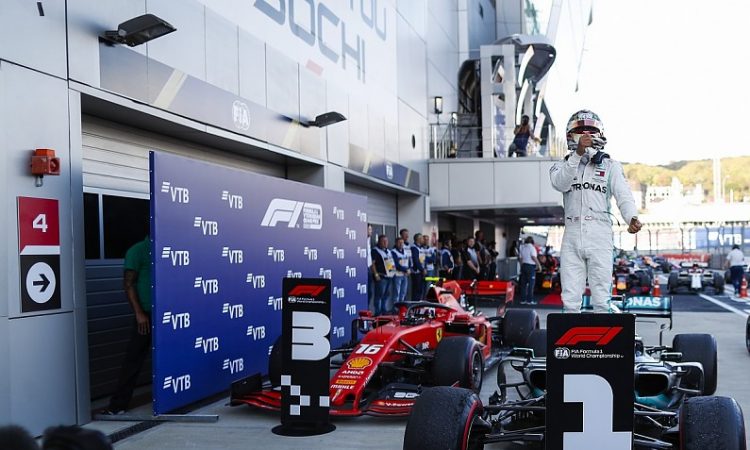 A euphoric Lewis Hamilton extended his world championship lead to 73 points on Sunday when he rode his luck to claim a strategic victory for Mercedes in a roller-coaster Russian Grand Prix.

Having grabbed the lead from pole man Charles Leclerc on the opening lap, Sebastian Vettel ignored team orders to let him pass before he suffered a mechanical failure and stopped on lap 28.

The resultant Safety Car period gifted Mercedes, who started on medium tyres while their rivals all used softs, a chance to extend their Sochi supremacy to six consecutive wins.

Leclerc came home a frustrated and disgruntled third, claiming he expected Vettel to repay him for his slip-stream in a race punctuated by two Safety Car interventions and one use of the Virtual Safety Car.

Hamilton’s win was his first since the Hungarian Grand Prix on August 4, his ninth in 16 outings this year and the 82nd of his career, lifting him 73 points clear at the top of the drivers’ title race. He scored an additional point for fastest lap.

Red Bull’s Max Verstappen finished fourth, having started ninth, ahead of team-mate Alex Albon, who had started from the pit lane.

Carlos Sainz was sixth for McLaren ahead of Sergio Perez of Racing Point, Kevin Magnussen of Haas, Lando Norris in the second McLaren and Renault’s Nico Hulkenberg.

“That’s exactly what we needed,” exclaimed a delighted Hamilton on the team radio following a flawless strategic performance by Mercedes.

“It was an incredible job by all the team – not giving up. Keeping up with Ferrari was a hard task, but we kept pushing.”