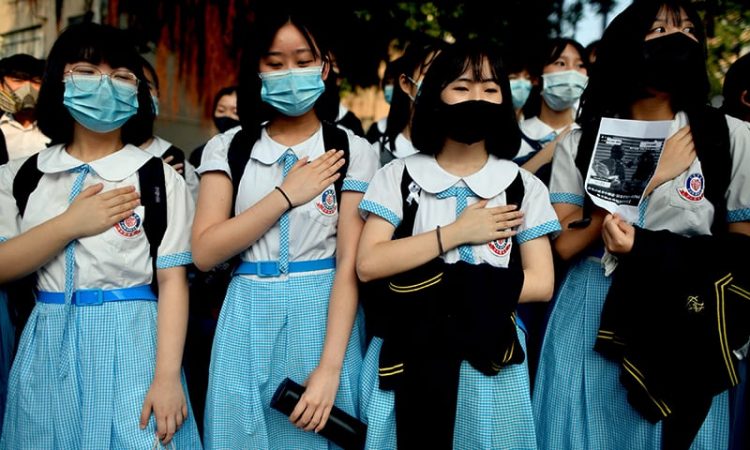 TOPSHOT - Schoolmates of form five student Tsang Chi-kin, 18, who was shot in the chest by police during violent pro-democracy protests that coincided with China's October 1 National Day, place their hands on their chests during a protest at a school in Hong Kong on October 2, 2019. - Hundreds of Hong Kongers staged a sit-in on October 2 outside the school of a protester who was shot by police as authorities said the wounded 18-year-old was now in a stable condition. (Photo by Mohd RASFAN / AFP)
192views

Flash-mob rallies broke out in Hong Kong Wednesday as anger mounted over police shooting a teenage protester who attacked officers in a dramatic escalation of the violent unrest that has engulfed the territory for months.

A large crowd of demonstrators, including office workers in shirts and suits, mustered in a park and then began marching through the city’s commercial district in an unsanctioned rally, chanting anti-police and anti-government slogans.

Hundreds of students also staged a sit-in at the school of 18-year-old Tsang Chi-kin, who was shot in the chest by a policeman as he and a group of masked protesters attacked officers with umbrellas and poles.

The international finance hub has been left reeling from the shooting, the first time a demonstrator has been struck with a live round in nearly four months of increasingly violent pro-democracy protests.

Tuesday witnessed the worst clashes of the summer as China celebrated 70 years of Communist Party rule with a massive military parade in Beijing.

Running battles raged for hours across multiple locations as hardcore protesters hurled rocks and petrol bombs. Police responded for the most part with tear gas, rubber bullets, and water cannon.

As criticism rose the police launched a spirited defence of their colleague at a press conference on Wednesday saying he feared for his life and the safety of his colleagues.

“He only had one option, that is to fire the gun to immediately resolve the danger,” deputy commissioner Tang Ping-keung told reporters.

But protest groups said the officer charged into the melee with his firearm drawn and failed to fire a warning shot as they condemned the increasing use of live rounds.

“The people of Hong Kong are sick and tired of having mere words of condemnation as their only shields against lethal bullets and rifles,” a masked protester said at a press conference near Tsang’s school.

Meanwhile, an Indonesian journalist who says police shot her in the eye with a rubber bullet while she was covering Sunday’s protests has suffered some permanent vision loss, her lawyer said Wednesday.

“Doctors treating (Veby Indah) have today informed her that regrettably the injury she received as a result of being shot by police, will result in permanent blindness in her right eye,” her lawyer Michael Vidler said, adding that the full extent of her sight loss will be assessed after surgery.