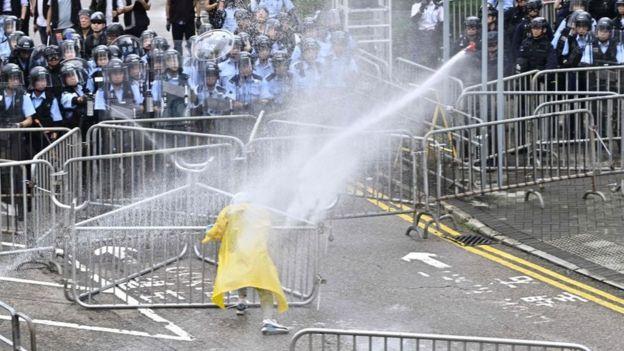 Protesters have blocked key roads around government buildings and threw bricks and projectiles at police.

The government is still pushing for the bill which would allow extradition to mainland China and it is expected to pass its final vote on 20 June.

But the Legislative Council (LegCo) has now delayed its second reading

Up until now, protests had been largely peaceful as thousands of protesters took to the streets and attempted to block access to government buildings ahead of the scheduled debate of the bill.

But on Wednesday, the demonstrations escalated, with tear gas and beanbag rounds being fired as activists tired to storm government buildings.

The BBC’s Gabriel Gatehouse is inside the LegCo building where police have effectively barricaded themselves. He reports one officer is injured and was carried away. The doors have been padlocked.

“This behaviour has gone beyond the scope of peaceful gatherings,” the Hong Kong Police Force said in a tweet on Wednesday.

But one young protester, decked in a black mask and gloves, told news site AFP that they would not “leave [until] they scrap the law”.

Political party the Hong Kong National Front has threatened to enter the Legislative Council and remain “indefinitely” on strike if the government does not withdraw the bill.
BBC