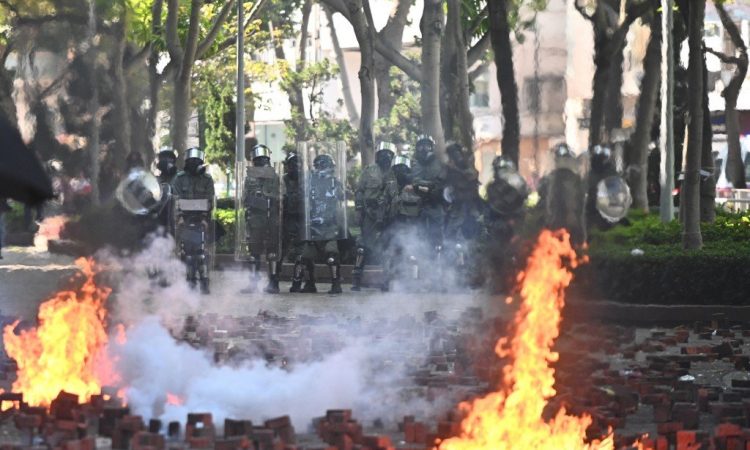 Hong Kong police fired tear gas on Sunday morning at protesters intent on keeping their stranglehold on a major tunnel as pro-democracy activists vowed to “squeeze the economy” into next week.

Dozens of government supporters had gathered in the area earlier to clear barricades near the university campus, which was the scene of more violence overnight as riot police clashed with protesters.

Around 80 to 100 middle-aged residents clapped and cheered as they moved debris from the road near the entrance to the crucial Cross Harbour Tunnel to Hong Kong island — shut since Tuesday — before protesters in masks and their signature black t-shirts returned to rebuild the roadblock.

Local media reported the activists were throwing bricks at the residents.

The clashes broke out as demonstrators vowed online to continue their “Blossom Everywhere” campaign of blockades and vandalism across the semi-autonomous financial hub which last week shut down large chunks of the train network and forced schools and shopping malls to close.

A poster circulating on social media called for “dawn action” on Monday. “Get up early, directly target the regime, squeeze the economy to increase pressure,” it said.

Students and protesters last week occupied several major universities around the city — the first time a movement characterised by its fluidity and unpredictability has coagulated in fixed locations.

The Polytechnic University (PolyU) has become a major flashpoint in the city rocked by a week of intensified violence and chaos. A message on the university’s Facebook page urged demonstrators to leave “immediately”.

A spokesman for Hong Kong’s government said the troop movement had not been requested by city authorities but was instead a “voluntary community activity initiated by themselves”.

The protests started against a now shelved bill to allow extradition to China but have billowed into wider calls for democracy.

Two people have died this month as the violence worsened, while the financial hub has been pushed into a recession by the turmoil.