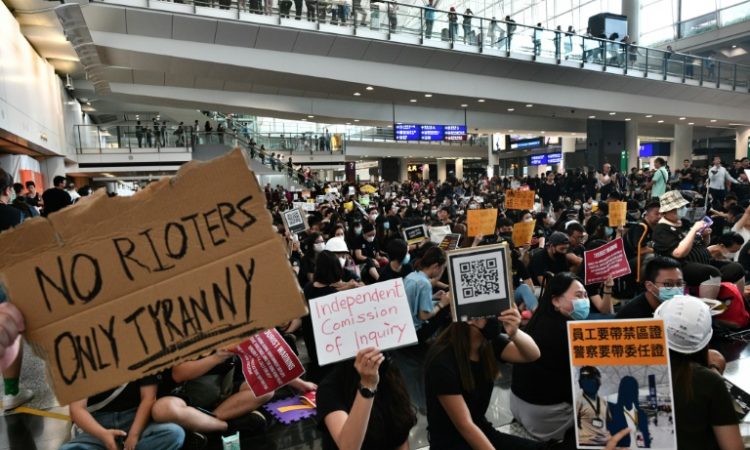 Hundreds of Hong Kongers, including flight attendants, held a rally in the airport’s arrival hall on Friday to “educate” visitors about the demonstrations currently gripping the international finance hub as it braces for another weekend of protests.

The cavernous hall is usually filled with excited friends and relatives waiting to greet loved ones as they make their way out of one of the world’s busiest airports.

But on Friday visitors were greeted by a sea of black-clad protesters chanting anti-government slogans, holding banners and handing out flyers.

The rally is the latest bid to keep pressure on Hong Kong’s pro-Beijing leaders after seven weeks of largely peaceful mass demonstrations followed by violent clashes, an unprecedented challenge to Beijing’s authority since the city’s 1997 handover.

The protests were triggered by a controversial bill which would have allowed extraditions to mainland China, but they have evolved into a call for wider democratic reforms and a halt to sliding freedoms.

Organisers billed the airport rally as an opportunity to brief arrivals on the political unrest, particularly visitors from mainland China where the state-controlled news has portrayed the protests as a violent, foreign-funded plot to destabilise the motherland.

The demonstration was peaceful and good-humoured, and there were no reports of any disruption to flights.