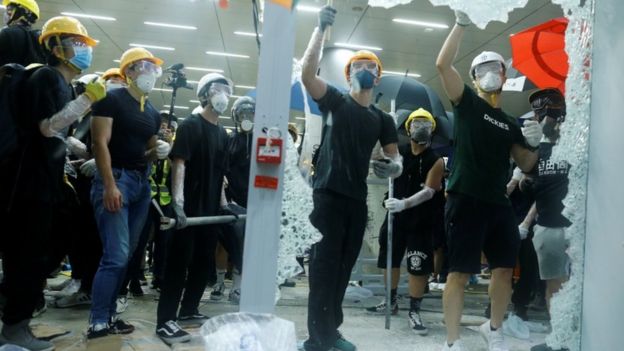 China has accused protesters who vandalised Hong Kong’s parliament on Monday of “serious illegal actions” that “trample on the rule of law”.

A group of activists occupied the Legislative Council (LegCo) building for several hours after breaking away from a peaceful protest.

The Chinese government urged the city to investigate the “criminal responsibility of violent offenders”.

Hong Kong, a former British colony, is part of China but run under a “one country, two systems” arrangement that guarantees it a level of autonomy. Its citizens enjoy rights not seen on the mainland.

Monday’s disorder followed weeks of mass protests over a controversial extradition bill, which critics have said could be used to send political dissidents from Hong Kong to the mainland.

The Chinese government said the ransacking of parliament was a blatant challenge to the “one country, two systems” formula.

So far, Beijing has reacted to the protests from a distance, but Monday’s violence could be a catalyst for Beijing to push for tighter control over Hong Kong, says BBC World Service Asia-Pacific editor Celia Hatton.

“Nothing is more important than the rule of law in Hong Kong,” she told a pre-dawn press conference on Tuesday, flanked by Police Commissioner Lo Wai-chung.

The government suspended the extradition bill last month and it is now unlikely to pass, but the protesters want it scrapped completely and are calling on Ms Lam to stand down.