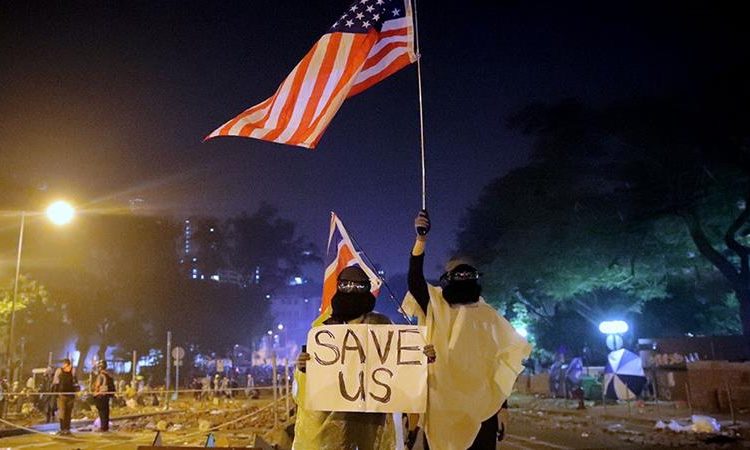 China has warned the US it could take “firm counter-measures” if Washington continues to show support for pro-democracy protesters in Hong Kong.

The warning came after US President Donald Trump signed the Human Rights and Democracy Act into law.

The act mandates an annual review, to check if Hong Kong has enough autonomy to justify special status with the US.

Mr Trump is currently seeking a deal with China, in order to end a trade war between the two countries.

“The US has been disregarding facts and distorting truth,” a Chinese foreign ministry statement said.

The ministry threatened “counter measures” if the US continued “going down the wrong path”.

The new law requires Washington to monitor Beijing’s actions in Hong Kong. The US could revoke the special trading status it has granted the territory if China undermines the city’s rights and freedoms.

Among other things, Hong Kong’s special status means it is not affected by US sanctions or tariffs placed on the mainland.

The bill also says the US should allow Hong Kong residents to obtain US visas if they have been arrested for being part of non-violent protests.

Analysts say the move could complicate negotiations between China and America to end their trade war.

Hong Kong’s government also reacted, saying the American bill would send the wrong signal and would not help to ease the situation.

But a key activist in the Hong Kong protest movement, Joshua Wong, said the US law was a “remarkable achievement” for “all Hongkongers”.

The bill was introduced in June in the early stages of the protests in Hong Kong, and was overwhelmingly approved by the House of Representatives last month.

Mr Trump said he signed it “out of respect for President Xi [Jinping], China, and the people of Hong Kong”.

He had previously been non-committal, saying he was “with” Hong Kong but also that Mr Xi was “an incredible guy”.

The US move comes amid a lull in protests following a pro-democracy landslide in local elections.

Hong Kong’s protests started in June against a proposed law to allow extradition to mainland China but it has since transformed into a larger pro-democracy movement.

Protesters have thrown petrol bombs and attacked businesses seen as being pro-Beijing.

On Thursday, authorities moved into the Polytechnic University days after it had been the site of a fierce standoff between student activists and riot police.

The police said they had found hundreds of petrol bombs and other home-made devices, and were dusting them for fingerprints.

A search found no remaining activists at the site but it is thought there could still be about a dozen people still hiding inside.