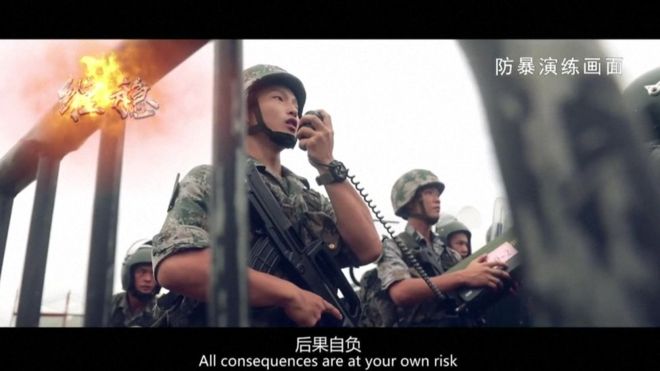 China’s army in Hong Kong has released a three-minute video showing troops carrying out “anti-riot” exercises, in what is being seen as a thinly veiled warning to pro-democracy protesters.

The video, posted to social media, begins with a soldier shouting: “All consequences are at your own risk.”

Tensions are high in Hong Kong after weeks of anti-government protests.

On Wednesday, more than 40 activists appeared in court charged with rioting, after Sunday’s protest turned violent.

If convicted, they could face up to 10 years in prison.

Hong Kong, a former British colony, is part of China but enjoys unique freedoms not seen on the mainland.

China’s People’s Liberation Army (PLA) has so far stayed out of the protests that have gone on for eight consecutive weekends and brought parts of central Hong Kong to a standstill – leaving the territory’s police to deal with the unrest.

But at a reception to mark the 92nd anniversary of the PLA on Wednesday, the commander of the Chinese army’s garrison in Hong Kong said the protests had “seriously threatened the life and safety of Hong Kong citizens, and violated the bottom line of ‘one country, two systems’.

“This should not be tolerated and we express our strong condemnation,” Chen Daoxiang said, in comments reported by the South China Morning Post, a Hong Kong newspaper.