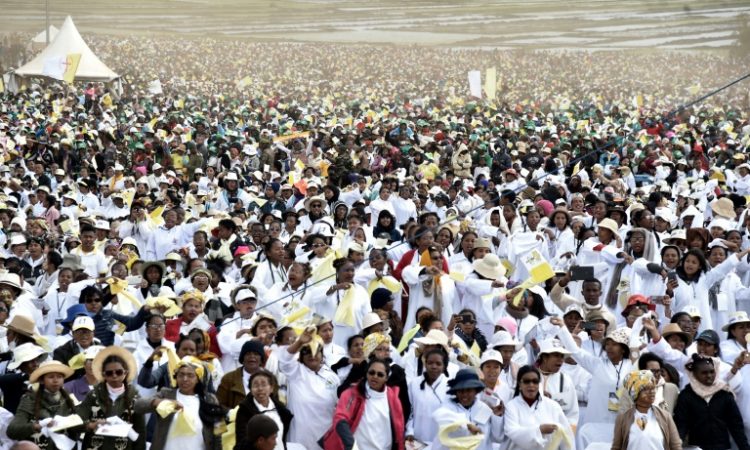 Hundreds of thousands of people on Sunday gathered on the outskirts of the Madagascan capital Antananarivo to hear Pope Francis say mass and deliver a homily condemning “privilege and exclusion” on the second leg of his three-nation African tour.

Many people wore pope-emblazoned white and yellow caps — the colours of the Vatican, and cheered as the pope-mobile made its way through wind-swept clouds of red dust at the sprawling site near Soamandrakizay.

The massive crowd, estimated by organisers to be as big as one million, had waited patiently from the early hours to see the first pope to visit the poor Indian Ocean island nation in 30 years.

After mass, Francis visited Akamasoa — “good friends” in the Malagasy language — a refuge town founded by Argentinian priest Father Pedro and built on a dump that has helped lift thousands of waste-pickers out of poverty.

Hordes of young people there gathered in a gymnasium to welcome the pontiff, cheering and waving flags as he entered alongside Pedro — often referred by locals to as the “arm of God” or “the second pope”.

“Akamasoa is an expression of God’s presence in the midst of his people who are poor,” said the pope.

“This village reflects a long history of courage and mutual assistance.”

Father Pedro, who moved to the poverty-stricken island country in 1976, echoed the pope’s remarks.

“In Akamasoa we have shown that poverty is not a fatality, but that it was created by a lack of social sensibility from political leaders who have turned their backs on the people who elected them.”

In Madagascar — home to 25 million people — the vast majority live in poverty on an income of less than two dollars a day. More than half its young people are jobless.

The country ranks 152 out of 180 nations on Transparency International’s Corruption Perceptions Index in 2018.

The Vatican said organisers estimated one million people gathered to attend the pontiff’s morning mass, with crowds stretching far into the distance.

Some described it as the biggest public gathering in Madagascar’s history.

During the homily, the Argentine pontiff urged them “to build history in fraternity and solidarity” and “in complete respect for the earth and its gifts, as opposed to any form of exploitation”.

“How hard it is to follow him (Jesus) if we seek to identify the kingdom of heaven with our personal agenda or… abuse the name of God or of religion to justify acts of violence, segregation and even murder,” he said.