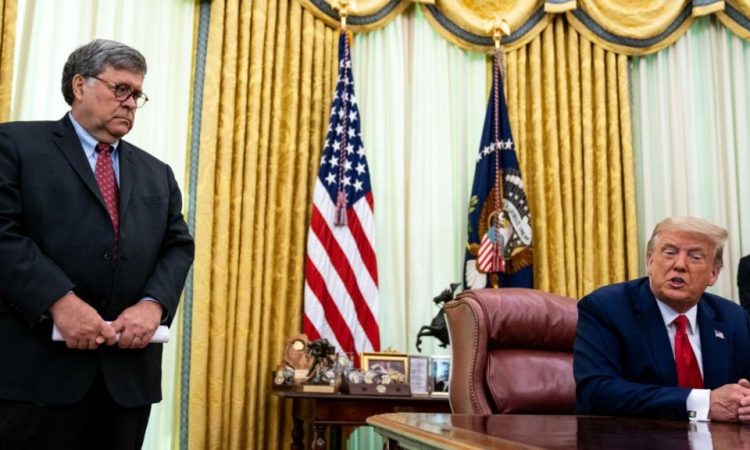 As President Donald Trump’s days in the White House wane, his administration is racing through a string of federal executions.

Five executions are scheduled before President-elect Joe Biden’s 20 January inauguration – breaking with an 130-year-old precedent of pausing executions amid a presidential transition.

And if all five take place, Mr Trump will be the country’s most prolific execution president in more than a century, overseeing the executions of 13 death row inmates since July of this year.

The five executions are to begin this week, starting with 40-year-old Brandon Bernard and 56-year-old Alfred Bourgeois. They are both scheduled to be put to death at a penitentiary in Terre Haute, Indiana.

Attorney General William Barr has said his justice department is simply upholding existing law. But critics have said the move is concerning, coming just weeks before Mr Biden – who has said he will seek to end the death penalty – takes office.

“This is really outside the norm, in a pretty extreme way,” said Ngozi Ndulue, director of research at the non-partisan Death Penalty Information Center.

Here’s what you need to know about President Trump’s last-minute rush of executions.

Since the federal death penalty was reinstated by the US Supreme Court in 1988, federal executions in the US have remained rare.

Before Mr Trump took office, only three federal executions had taken place in this period.

All were carried out under Republican President George W Bush, and included inmate Timothy McVeigh, convicted of the Oklahoma City federal building bombing. Since 2003, there have been no federal executions at all.

US states have continued to execute inmates in state prisons, putting a combined 22 death row inmates to death last year. But state executions are also on a downward trend.

A growing number have moved to abolish capital punishment all together, and the majority have either formally banned the practice or have not put any inmates to death in more than a decade.

Popular opinion, too, has shifted away from capital punishment. A November 2019 Gallup poll found that 60% of Americans supported life in prison over the death penalty for the first time since the survey began more than 30 years ago.

“Public support for the death penalty is at a decades-long low,” Ms Ndulue said.

Further problems have emerged with the methods of execution, sourcing drugs used for lethal injections, and the costs of decades-long court battles and appeals.

“Congress has expressly authorised the death penalty,” the country’s top legal official said in a statement at the time. “The justice department upholds the rule of law – and we owe it to the victims and their families to carry forward the sentence imposed by our justice system.”

The selected inmates had been convicted of murdering or raping children and the elderly, Mr Barr said.

“We feel [the death penalty] is an unconstitutionally arbitrary punishment that should have been abolished decades ago,” said Lisa Cylar Barrett, director of policy at the NCAAP Legal Defense Fund.

And the particular selection of inmates fuelled charges that the decision was politically motivated.

The first set of executions this summer – during a wave of anti-racism protests and demonstrations – were all of white men. Now, four of the five prisoners scheduled to be put to death are African American.

Ms Ndulue said she didn’t think it was “coincidental” that no black prisoners were scheduled for execution during a period of “enhanced awareness of the racial disparities around the federal death penalty”.

Research suggests the death penalty has been enforced differently according to race.

“One of the most robust findings of study after study, in jurisdictions across the country, is that the race of your victim is a serious factor in determining whether or not you will have the death penalty,” Ms Ndulue said.

If the executions of Brandon Bernard and Alfred Bourgeois go ahead as scheduled the 10 inmates executed in 2020 will bring a single-year total unmatched in modern history.

“We’d have to go back to 1896 to find another year where there were 10 or more executions,” Ms Ndulue said.

The Trump administration has also chosen to carry out federal executions in the midst of a political transition, with a lame-duck president, for the first time in more than a century.

Incumbent presidents have typically deferred to their predecessors, allowing presidents-elect to set the course.

In an interview with the Associated Press, Mr Barr defended the post-election executions, and said he would likely schedule more before he leaves the justice department.

But it is a controversial choice, especially as the incoming Biden administration has said it will work to end the death penalty.

The first scheduled execution, of Bernard, has drawn particular attention. Convicted of murder and kidnapping in 1999, Bernard was 18 years old at the time of his offense, and would be the youngest offender executed by the federal government in nearly 70 years.

Five of the nine surviving jurors in the case, as well as the US attorney who defended the death sentence on appeal, have publicly called for his execution to be stopped.

Kim Kardashian has also weighed in, making a direct appeal to Mr Trump on Twitter.