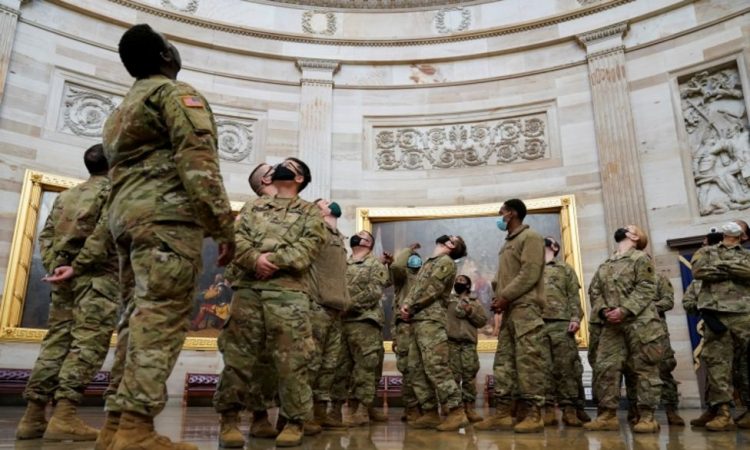 One week after deadly unrest at the heart of the US government, photographs are going viral of National Guard troops keeping watch over the Capitol.

The images, showing a heavy security presence inside and outside the building, are a complete contrast to the scenes of chaos broadcast around the world last week.

At least 10,000 members of the National Guard will be in Washington DC by Saturday and police officials say that number could be more than doubled for Joe Biden’s inauguration next week.

The large deployment came shortly before the House of Representatives voted on Wednesday to impeach President Donald Trump for a second time for the role he played in last week’s violence.

Mr Trump was impeached for “incitement of insurrection”. Ten Republicans from his own party joined the opposition Democrats to vote in favour of charging him.

Many of the lawmakers voting on Wednesday were caught up in the events of last week, when thousands of radical pro-Trump supporters broke into the Capitol complex as Congress was certifying the presidential election results.

After the building was secured and rioters cleared, a large fence was erected and thousands of National Guardsmen were brought in to help protect Congress.

As of Tuesday, the Pentagon approved those protecting the Capitol to carry lethal weapons as well as protective equipment.

The highly visible show of force comes amid widespread criticism of the chaotic security situation last week and amid fears of further violence in the run-up to Mr Biden’s inauguration on 20 January.

The FBI, still hunting those responsible for last week’s violence, has issued warnings of possible armed protests and further unrest across the country in the coming days.