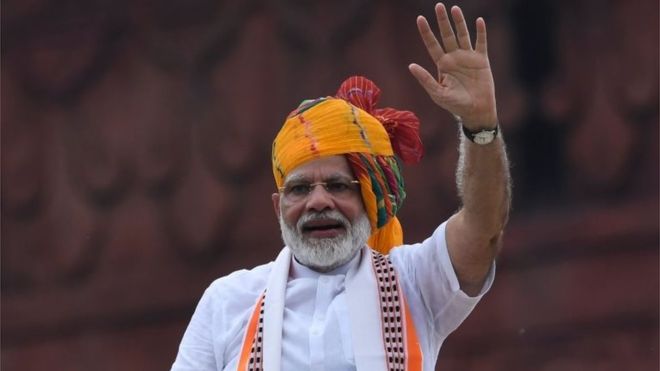 Prime Minister Narendra Modi said his decision to strip Indian-administered Kashmir of its special status would restore the region to its “past glory”.

He said Kashmir will play an “important role” in India’s development during his Independence Day speech on Thursday.

He said Article 370, the constitutional provision that granted it special status, had only encouraged corruption.

Mr Modi did not refer to the lockdown and communications blackout imposed in Kashmir since the decision last week.

He made the remarks during his Independence Day speech at the iconic Red Fort in the capital Delhi on Thursday.

India celebrates Independence Day one day after Pakistan, which was partitioned from India in 1947.

During his speech on Wednesday, Pakistan Prime Minister Imran Khan criticised India for its Kashmir move.

“The world’s eye is on Kashmir and on Pakistan. Whatever was done during the curfew by India, we will tell the international community that you are responsible. Whichever forum we get, I will be the ambassador and bring up Kashmir at every forum,” he said.

But Mr Modi did not respond to Mr Khan’s remarks. Instead, he criticised people at home who opposed the revocation of Article 370, accusing them of “playing politics”.

Past governments had lacked the courage to take such a bold step because they were worried about their political future, he said.