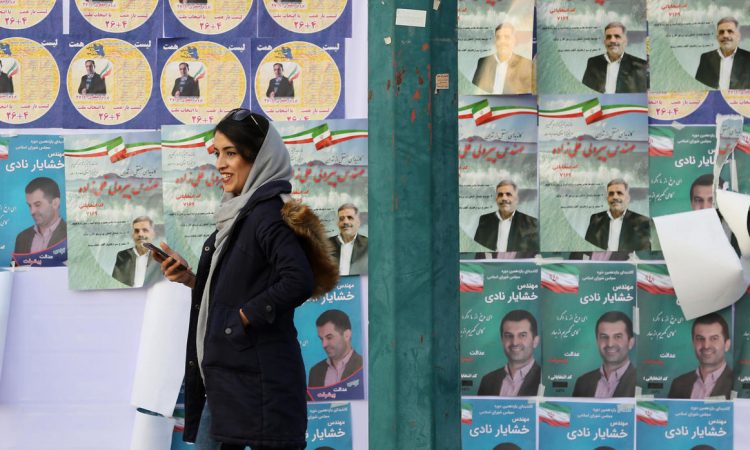 Opponents of Iran’s theocratic leadership are urging an outright boycott of its parliamentary elections, arguing that it is anything but democratic and that casting a ballot serves only to bolster the country’s Islamic rulers.

The country’s supreme leader has urged Iranians to “disappoint the enemy” by participating en masse in the vote on Friday, which coincides with one of the most testing periods for the country since the ousting of the pro-US shah in 1979.

“Participating in elections and voting… is a religious duty” that will strengthen the Islamic republic against the “propaganda” of its enemies, Ayatollah Ali Khamenei said Tuesday.

The crisis prompted some of the most potent protests since the Revolution and the ferocious crackdown that followed.

The elections have been overshadowed by mass disqualifications of over 7,000 mainly moderate and reformist candidates by the Guardian Council oversight body.

The council threw out more candidates than it allowed in, including most incumbent MPs.

In a message from her jail cell, posted on her husband’s Facebook page, Iranian rights activist Narges Mohammadi said a boycott of the elections was the only peaceful means of protest left now that demonstrations are no longer being authorised.

“We need to rise up in the most civilised way and launch a strong boycott campaign to respond to the repressive policies of the government,” wrote Mohammadi, who is serving a 10-year sentence for “forming and managing an illegal group.”

Opponents outside Iran argue that the government’s pressure on citizens to vote means that anyone who casts their ballot is effectively legitimising the system.

Masih Alinejad, a former journalist who has left the country and leads a campaign against the enforced Islamic headscarf for women, has issued a viral video on social media warning that voting overlooks the memory of those killed in the protests.

While officials tell everyone to vote for the sake of the country, “the day after the election, it’s back to normal — the establishment claims the votes gave the Islamic regime legitimacy, and all promises of greater freedoms are forgotten,” she told AFP from New York.

“The candidates are pre-selected, no opposition views are tolerated and even the turnout is stage-managed,” she said, adding that instead of voting, people should demand a UN investigation into the November protests.

Amnesty International has confirmed the deaths of 300 people in the crackdown that followed those protests, and some estimates are far higher.

Iran rejects the reports but has yet to give its own figures.

Tehran’s admission that it accidentally shot down a Ukrainian airliner in January, killing all 176 on board, sparked more protests, at the very moment when the authorities were seeking to consolidate national sentiment following the US killing of top commander Qasem Soleimani.

Underlining the importance of mass participation, Khamenei said in a speech on February 5 that “the enemies who threaten the country and the nation are more afraid of popular support than our armaments.”

Turnout has varied widely in Iranian parliamentary elections over the past decades, but has generally been recorded at more than 50 percent and sometimes topping 60 percent — a figure the authorities will want to see repeated on Friday.

While the leadership should be able to count on a reasonable turnout from supporters of conservatives and in more rural areas, it is not certain how many will vote in bigger cities such as Tehran, Isfahan, Shiraz and even the holy city of Mashhad, said Ellie Geranmayeh, a senior policy fellow at the European Council on Foreign Relations.