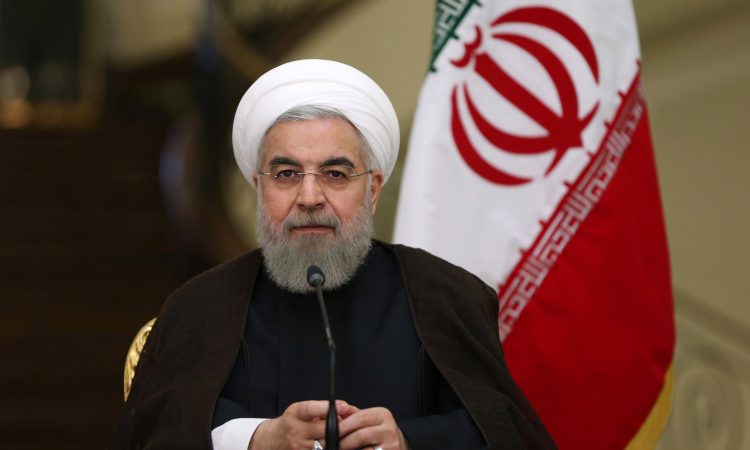 Iranian President Hassan Rouhani speaks with media in a joint press conference with his Austrian counterpart Heinz Fischer after their meeting at the Saadabad Palace in Tehran, Iran, Tuesday, Sept. 8, 2015. Iran's president said on Tuesday that his country is ready to hold talks with the United States and Saudi Arabia on ways to resolve Syria's civil war, providing such negotiations can secure peace and democracy in conflict-torn Syria. (AP Photo/Ebrahim Noroozi)
230views

Iran has said it intends to breach on Sunday the uranium enrichment cap set by a landmark nuclear deal in a bid to press signatories to the endangered pact into keeping their side of the bargain.

The looming move — involving purifying beyond the 3.67 percent allowed by the 2015 agreement — was confirmed by President Hassan Rouhani on Wednesday, despite opposition from the United States and the European Union.

He in effect made concrete a threat initially flagged by the Islamic Republic on May 8, exactly a year on from US President Donald Trump unilaterally abandoning the multilateral deal.

French President Emmanuel Macron told Rouhani of his “strong concern” over the risk of weakening the nuclear agreement and the consequences that would follow during a telephone call Saturday, according to a statement from the Elysee Palace.

However, the two leaders agreed to “explore by July 15 the conditions for a resumption of dialogue between all parties”, the statement said, adding that Macron would consult with Iranian authorities and international partners to bring about the “necessary de-escalation” of the situation over the coming days.

Rouhani said the planned move is in response to a failure by remaining state signatories to keep their promise to help Iran work around biting sanctions reimposed by the US in the second half of last year.

It is not yet clear how far the Islamic Republic will boost enrichment.

But a top advisor to Iran’s Supreme Leader Ayatollah Ali Khamenei hinted on Friday it could reach five percent.

The 2015 deal was reached between Iran and six world powers — Britain, China, France, Germany, the United States and Russia — and saw Tehran agree to drastically scale down its nuclear programme in exchange for sanctions relief.

Washington began reimposing sanctions in August 2018 and has targeted crucial sectors including oil exports and the banking system, fuelling a deep recession.

The 3.67 percent enrichment limit set in the agreement is sufficient for power generation but far below the more than 90 percent level required for a nuclear warhead.

Rouhani stressed that Iran’s action would be reversed if the other parties provided relief from the US sanctions.

The Iranian president has insisted that his country’s policies are not meant to “hurt (the deal), but to preserve” it.