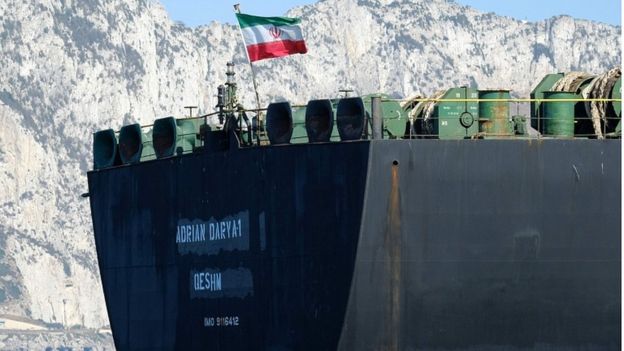 An Iranian ship held by Gibraltar since July on suspicion of transporting oil to Syria has left port.

Marine tracking shows the tanker moving east into the Mediterranean. Its destination is not known.

Gibraltar earlier rejected a request by the US to again seize the ship, which has changed its name from Grace 1 to Adrian Darya-1.

The US made the last-minute request on Friday, a day after Gibraltar lifted its detention order.

Gibraltar – which has not confirmed the ship’s departure – said it could not comply with Washington’s request to issue a new detention order because US sanctions against Iran did not apply in the EU.

The ship with its crew of 29 – from India, Russia, Latvia and the Philippines – was seized with the help of British marines on 4 July, after the government of Gibraltar – a British territory – suggested it was heading for Syria in breach of EU sanctions.

The move sparked a diplomatic crisis between the UK and Iran, which has escalated over recent weeks and saw Iran seize a British-flagged and Swedish-owned oil tanker, Stena Impero, in the Gulf.