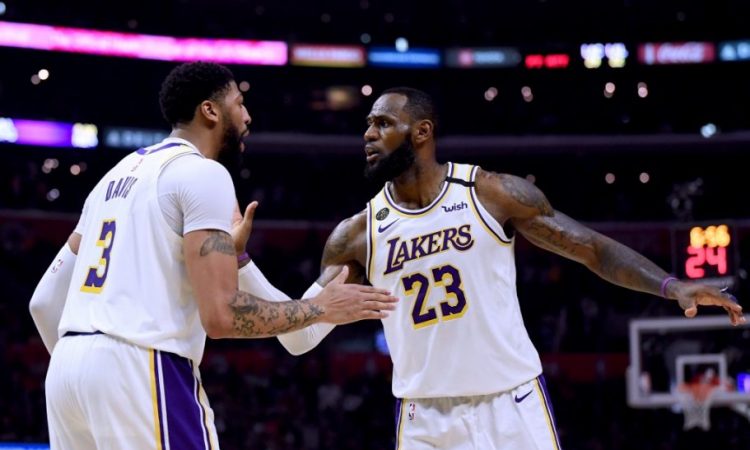 LeBron James and Anthony Davis combined for 58 points as the Los Angeles Lakers beat the Los Angeles Clippers for the first time this season with a 112-104 NBA victory on Sunday.

James scored 28 points and dished out nine assists while Davis finished with a team-high 30 points in the showdown between the two best teams in the NBA’s Western Conference.

“These are two teams gearing up for the playoffs,” said James. “It was hard fought.”

But unlike Friday’s Laker win over Milwaukee, the dynamic duo got some offensive help from another starter. Avery Bradley tallied 24 points, delivering on six of 12 three-point attempts as the Lakers avenged consecutive losses to the Clippers on Christmas Day and the season opener in October.

Paul George scored a team-high 31 points and reigning NBA Finals Most Valuable Player Kawhi Leonard poured in 27 points for the Clippers, who had their six-game win streak snapped.

The Lakers were coming off an even more impressive win on Friday in which James and Davis joined forces to score a combined 67 points as they took down Giannis Antetokounmpo and the Milwaukee Bucks 113-103 in a matchup between the NBA’s top clubs.

James and Davis outscored all nine of their teammates combined against the Bucks.

“We knew it was a big weekend for us. Milwaukee on Friday and they are number one in the league, and the Clippers beat us twice before. We don’t want to be swept by anyone,” said James of the Lakers, who won their fourth straight game.

Against the Clippers, Bradley was the only other Laker in double figures as he got hot from beyond the arc.

“He was unbelievable,” Vogel said. “It was his best weekend in a Lakers’ uniform.

“This was his best two game stretch. He helped close them out. AD (Davis) had some big buckets, but was in foul trouble tonight.

“He (James) was too much for them. He dominated both games.”

There is a chance the Lakers could face the Clippers in the postseason after they clinched their first playoff berth in seven years when they beat the Bucks.

The Lakers took over in the fourth as James got it started with a three-pointer. His three-point play and a basket by Davis capped a 14-6 run that stretched the lead to 99-87 in the fourth, their first double-digit lead of the game.

“Just trying to come out in the second half and not let the game get away from us,” Davis said. “We wanted to make sure we come out with a little bit more offensive intensity and aggression.”

George and Leonard combined to score 12 consecutive points in a fourth quarter surge, but they failed to regain the lead.

“They were the team that really wanted it and they went and got it,” George said. “It’s hard to beat any team three times in a row in this league. It doesn’t set us back.”

Also, D.J. Augustin, who had 24 points, was one of six players to reach double figures as the Orlando Magic pounded the struggling Houston Rockets 126-106 in Houston.

The Rockets suffered a second straight blowout loss at home. James Harden made just three of 10 three pointers and finished with 24 points.

Harden is now five-of-21 from three-point range and has committed 14 turnovers in the last two games.