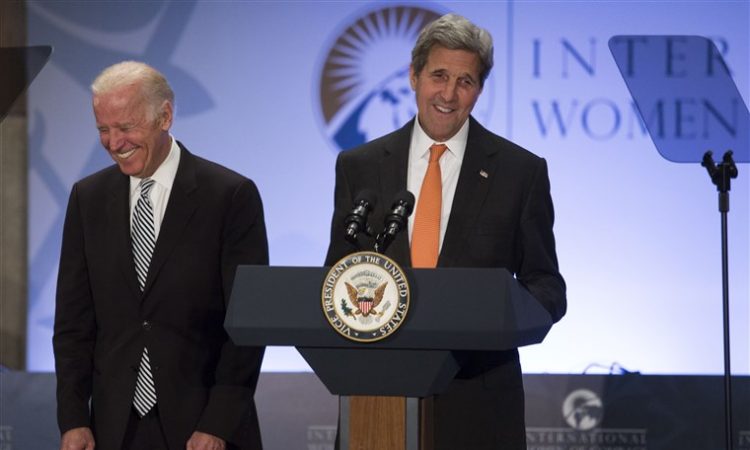 Former US Secretary of State John Kerry has endorsed frontrunner Joe Biden to be the Democratic Party’s candidate in the 2020 presidential election.

“There’s never been a time more urgent for leadership at home,” he said in statement released by the Biden campaign.

Mr Kerry is expected to join former Vice-President Biden on the campaign trail in Iowa on Friday.

His backing is seen as a high-profile boost for the Biden bid.

Many major Democratic figures, including former President Barack Obama, have yet to say which of the candidates they will back. Notable endorsements include New York Congresswoman Alexandria Ocasio-Cortez’s decision to back Bernie Sanders.

“Joe will defeat Donald Trump next November. He’s the candidate with the wisdom and standing to fix what Trump has broken, to restore our place in the world, and improve the lives of working people here at home,” Mr Kerry said.

“There’s never been a time more urgent for leadership at home that can work for the middle class and tackle existential issues like climate change where we are moving dangerously backwards,” Mr Kerry, himself a former presidential candidate, added.

The statement cites Mr Biden’s co-operation with Mr Kerry on nuclear disarmament, the Iran nuclear deal and combating the Islamic State group, as well as Mr Biden’s work on US healthcare reform, gun control and violence against women.

But on Wednesday it was cut by one when Kamala Harris dropped out after the California senator struggled to make progress, despite high hopes when she launched her campaign in January.

She failed to hang on to her briefly held position among the leading candidates – Mr Biden, Bernie Sanders, Elizabeth Warren and Pete Buttigieg.

Mr Kerry, 75, was secretary of state during Barack Obama’s second term as president. He lost to incumbent Republican George W Bush in the 2004 presidential election.