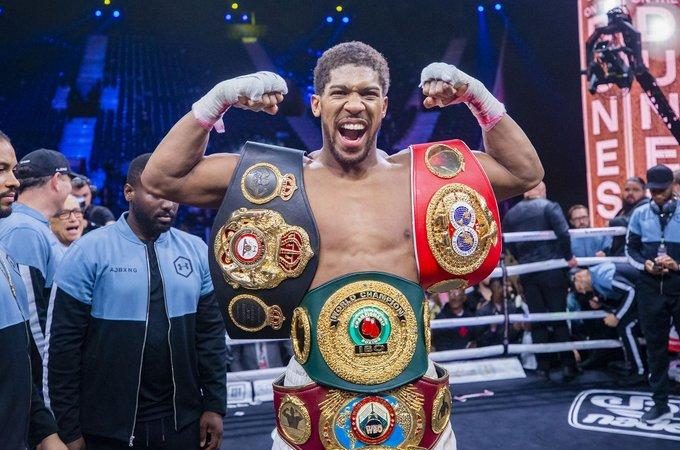 Anthony Joshua would not be drawn on his future plans after regaining his world heavyweight titles from Andy Ruiz on Saturday.

The Nigerian – British star won back his WBA, IBF and WBO belts with a one-sided unanimous defeat of Ruiz in Diriyah outside Saudi Arabia’s capital.

The victory reinstates Joshua as a major player in boxing’s most glamorous division, and instantly renews speculation about a possible unification superfight with WBC champion Deontay Wilder.

But Joshua, 30, said while he remained open to a fight with the unbeaten Wilder, he would not “chase” the fight.

“It’s difficult to unite them,” said Joshua, who had seen negotiations with Wilder’s camp fall flat several times before his defeat to Ruiz in June.

“We’ll see what happens. Chasing that fight wasn’t playing to my benefit, so I’m going to let the path takes it course.

“When the opportunity presents itself to become unified heavyweight champion I’ll take it.”

Ruiz meanwhile is eager for a third meeting with Joshua. Although Joshua indicated he would be happy to face the Mexican-American again, that fight is unlikely to happen anytime soon.

“We are going to celebrate. Anthony Joshua is an amazing ambassador for the sport. Tonight, in Saudi Arabia, he becomes the two-time heavyweight champion of the world and that is beautiful.

“They wrote him off. They said he was all hype. He had to come back from humiliation at Madison Square Garden. Tonight, he is the governor. The governor of the division.”

Joshua, meanwhile, said he had never doubted his ability to regain the titles despite his shocking defeat in New York, when Ruiz knocked him down four times in one of heavyweight boxing’s greatest upsets.

“I’ve said it was like sitting an exam,” Joshua said. “I failed the exam first time. This time though I studied, prepared and I just knew I was going to pass.”

Joshua also defended his cagey tactical style, saying he had consciously avoided being sucked into a slugfest against the hard-hitting Ruiz.

“There were times when I looked in Andy’s eyes and I wanted to put my fist through his head,” Joshua said.

“But this is boxing. It’s dangerous. I had a gameplan, I had a strategy and I wanted to follow it through.

“If I box for the crowd, or box for other people’s opinions, I might not have been victorious. So I’m just going to follow my instincts and box for myself.”