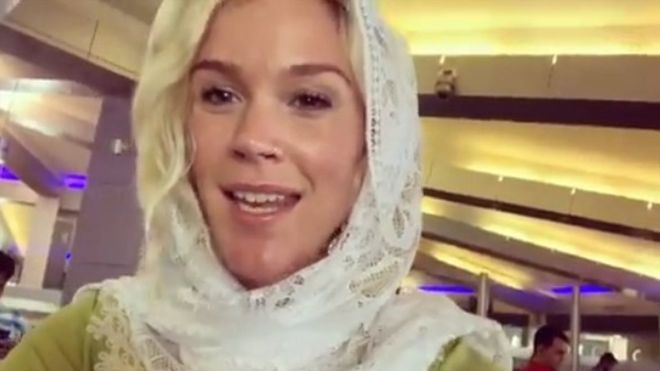 British singer Joss Stone says she has been denied entry to Iran – the last country she had to visit as part of a five-year, 200-stop “total world tour”.

The 32-year-old posted a video from Kish Island in which she said: “We got detained and then we got deported.”

She said that she knew Iran did not allow women to perform solo concerts.

“However, it seems the authorities don’t believe we wouldn’t be playing a public show, so they have popped us on what they call the ‘blacklist’.”

“After long discussions with the most friendly, charming and welcoming immigration people, the decision was made to detain us for the night and to deport us in the morning,” she added. “Of course I was gutted. So close yet so far.”

Kish Island, which is in the Gulf off the southern Iranian coast, is the only place in Iran that foreigners can visit without needing a visa.

She said immigration officials at island’s airport had encouraged her to go to the Iranian embassy in the UK to “sort it all out and come back”.

Earlier this week, Stone posted pictures from what she said was a trip to Yemen, which has been devastated by a four-year civil war.

She said she was given permission to perform before an audience of men and women by the governor of al-Mahra province, which borders Oman and is far from the fighting between Yemeni government forces and the rebel Houthi movement.