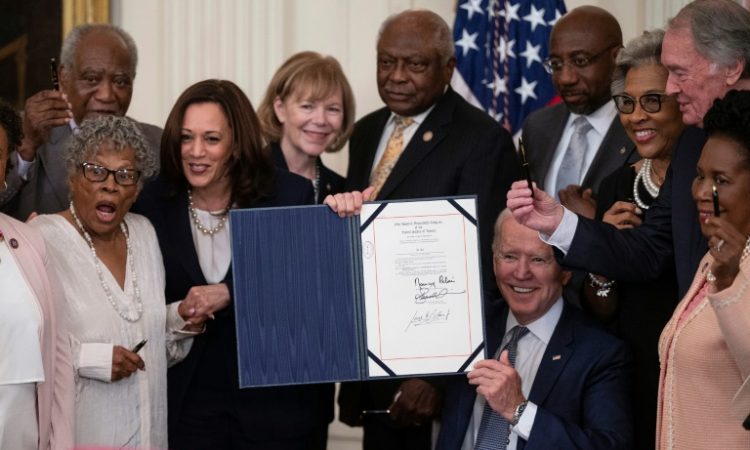 President Joe Biden signed a law making Juneteenth a federal holiday commemorating the end of slavery in the United States as the nation continues enacting change amid a racial reckoning.

“Today we consecrate Juneteenth for what it ought to be, what it must be – a national holiday,” said Biden, who returned on Wednesday from his first trip as president to Europe.

“This is a really, really important moment in American history. By making Juneteenth a federal holiday, all Americans can feel the power of this day and learn from our history and celebrate our progress,” Biden said.

“Today is a day of celebration,” said Harris, the nation’s first Black vice president. “It is not only a day of pride, it is also a day for us to reaffirm and rededicate ourselves to action.”

Juneteenth commemorates when the last enslaved Black Americans learned they were free after the US Civil War between Confederate slave-holding states in the south and free states of the Union in the north.

Confederate soldiers surrendered in April 1865, but word did not reach the last enslaved Black people until June 19, when Union soldiers brought the news of freedom to Galveston, Texas.

US presidential historian Michael Beschloss lauded Biden’s signing of the bill in a tweet.

It is the first creation of a national holiday since Martin Luther King Jr Day was established in 1983 to recognise the slain civil rights leader.

At the signing ceremony, Biden bent on one knee and embraced Opal Lee, a 94-year-old Texan who has campaigned her entire life to make Juneteenth a national holiday.

“You just received a very special recognition from the president of the United States,” Harris joked to applause among dignitaries assembled at the White House for the bill signing.

Known as the US’s “Second Independence Day”, Juneteenth is an important holiday for African Americans and is celebrated in Black communities in Texas and throughout the US with prayer breakfasts, civic events, family gatherings, and barbeques.

The bill passed the Senate by unanimous consent earlier in the week and rocketed through the House of Representatives on Wednesday in a 415 to 14 vote. It had been championed for years by Black legislators in the US Congress led by Representative Sheila Jackson Lee, a Democrat from Texas who is Black.

Juneteenth has taken on added significance amid the US’s new reckoning with its history of racism and widespread protests following the death of George Floyd last year, a Black man killed by a white police officer.

Most US states already recognise Juneteenth as a holiday or have an official observance of the day. Juneteenth has been a paid holiday for state employees in Texas, New York, Virginia and Washington, DC.

Under the new law signed by Biden, the federal holiday will be known as Juneteenth National Independence Day, marking African Americans independence from slavery.