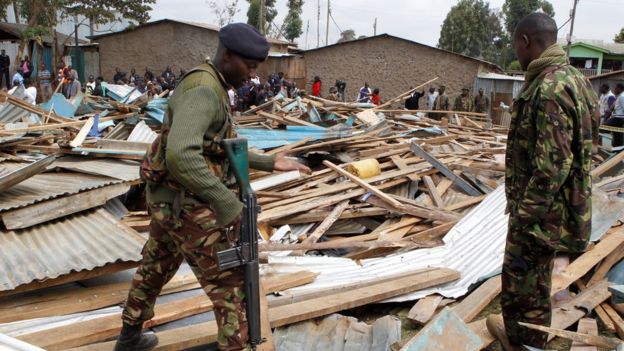 At least seven children have died after a classroom collapsed at a primary school in the Kenyan capital Nairobi, officials say.

The wooden structure at Precious Talent Top School collapsed just minutes after the start of the school day on Monday.

Dozens of people were injured and have been taken to hospital in the city. Emergency services are at the scene.

Rescuers have reportedly had difficulty getting to the school because of the large crowds that have gathered nearby.

“We have regrettably lost seven lives to this morning’s incident,” Education Secretary George Magoha told reporters outside the school in Dagoretti. He added that 64 people had been injured.

The school’s director, Moses Ndirangu, has blamed the collapse on the construction of a nearby sewer which he says may have weakened the foundations of the building.

But one local architect, Professor Alfred Omenya, told the BBC that the school was poorly built and was a “disaster waiting to happen”.

The incident happened shortly before 07:00 local time (04:00 GMT) and dozens of children were quickly rushed away from the scene.

The Kenya Red Cross has transferred some children to the Kenyatta National Hospital. Two of the injured are reported to be in a critical condition.

The first floor of the building collapsed and trapped the children below, local politician John Kiarie told the NTV Kenya television channel.

Angry locals have complained about the slow emergency response, the BBC’s Ferdinand Omondi reports from Nairobi.