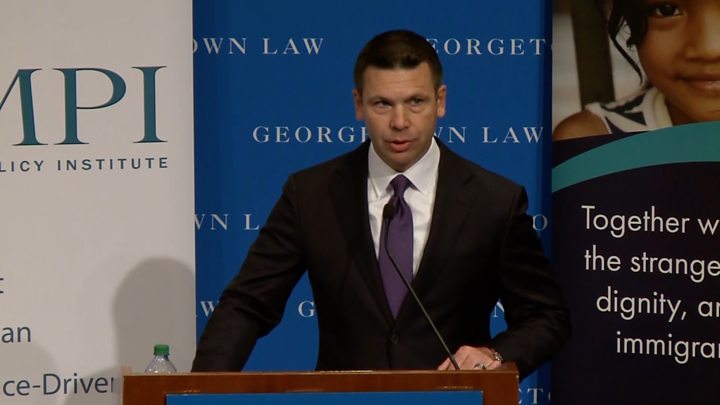 The acting head of US Homeland Security, Kevin McAleenan, has resigned after six months in the post.

In a tweet, President Donald Trump said Mr McAleenan wanted to spend more time with his family. He said his replacement would be named next week.

Mr McAleenan, 48, is the fourth person to serve as the head of Homeland Security during Mr Trump’s tenure.

He has overseen the president’s tough policies aimed at curbing immigration across the Mexican border.

However, analysts have described a turbulent relationship between the two and Mr McAleenan has criticised the tone of the immigration debate.

Recently he was shouted off stage by student protesters at a university in Washington DC.

“We have worked well together with border crossings being way down,” he said.

“Kevin now, after many years in government, wants to spend more time with his family and go to the private sector.”

Mr McAleenan became acting head of the department after the resignation in April of Kirstjen Nielsen.

President Trump had often accused her of not being tough enough on controlling immigration.

During the administration of President Barack Obama, Mr McAleenan served as deputy commissioner of Customs and Border Protection (CBP).

In 2015, he received the highest civil service award from the then-president.

In 2018, he faced criticism in the media for carrying out Mr Trump’s zero-tolerance policy that led to the controversial separation of families at the US southern border, but he has maintained his agency’s duty is to carry out the law, not create it.

Earlier this month, the Washington Post described him as increasingly isolated within the Trump administration and overshadowed by others more vocal in their support for President Trump.

In an interview, Mr McAleenan lamented not having control over “the tone, the message, the public face and approach of the department in an increasingly polarised time. That’s uncomfortable, as the accountable, senior figure.”