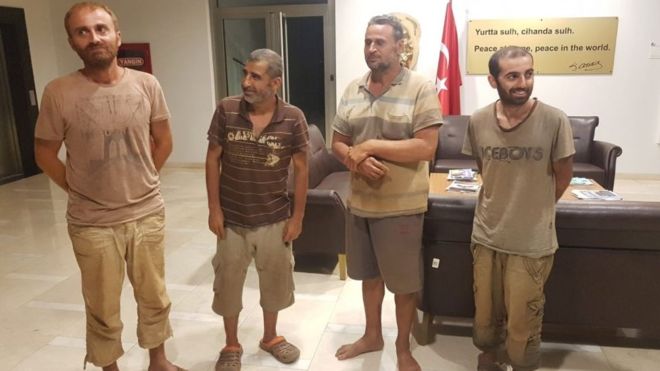 Four Turkish nationals have been rescued a week after being kidnapped by gunmen in Nigeria’s western state of Kwara, police say.

The four, who are construction workers, were taken from a bar last week.

The abductors had demanded a $1m (£800,000) ransom but police say no money was paid and that they were released “unconditionally”.

Kidnapping for ransom is common in Nigeria, with foreigners and high-profile Nigerians frequently targeted.

Two weeks ago pirates attacked a cargo ship off the coast of Nigeria and kidnapped 10 Turkish sailors. Their fate remains unknown.

The Turkish constructors were found in a bush on Friday, Kayode Egbetokun, Kwara sate’s commissioner of police, told the BBC.

The rescue operation was carried out by the state police, local vigilantes and a team of officers sent from the capital, Abuja.

Mr Egbetoku said the arrest of three other kidnappers, before the rescue operation, had helped.

“These arrests put pressure on the remaining gang members to release the Turkish hostages unconditionally,” he said, adding that police were looking for the rest of the gang.

The four Turkish nationals underwent medical examinations after their release.

Turkish Ambassador to Nigeria Melih Ulueren said he was glad the ordeal was over and thanked those involved in the operation, TRT news site reports.