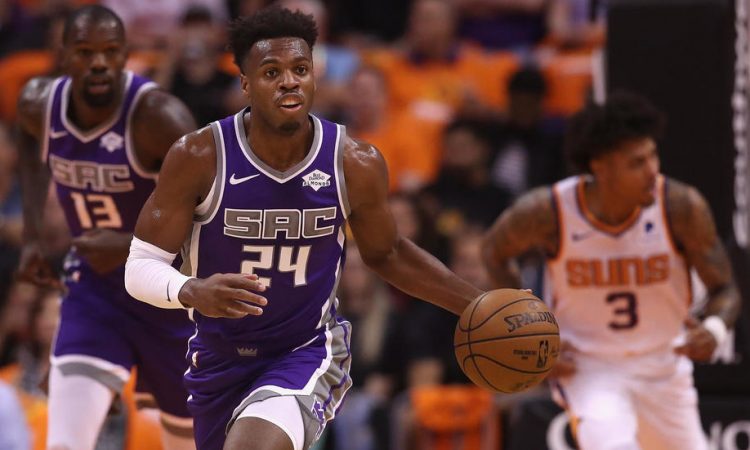 Sacramento center Richaun Holmes sank two decisive free throws with 13 seconds remaining to give the Kings their fifth win in seven games after an 0-5 start.

“Thank God we were able to pull off this win. Definitely needed this win,” Hield said. “We’ve got to stay locked in and stay focused and be ready for every challenge every night.

“We know what we’re doing. We’re going to try to take it one game at a time and we’ll be fine.”

Boston fell to 10-2, having not lost since their season opener three-and-a-half weeks ago at Philadelphia.

The Celtics, led by Jaylen Brown’s 18 points, saw the end of their longest win streak since taking 16 in a row early in the 2017-18 campaign.

Boston’s Jayson Tatum answered with a jumper but Hield, who went 14-of-24 from the floor, struck again with a fadeaway only for Boston to answer on a Daniel Theis dunk, giving the Celtics a 99-98 edge with 52 seconds remaining.

Holmes was fouled going for a rebound by Boston’s Marcus Smart and sank two free throws to put the Kings ahead by the final margin.

Smart missed a jumper for the win at the final buzzer and Sacramento had the victory.

Elsewhere, LeBron James scored 33 points as the Los Angeles Lakers cruised to a 122-101 win over the struggling Atlanta Hawks.

The Lakers jumped out to a 25-point lead in the first quarter and never looked back.

Rajon Rondo scored 15 points and Anthony Davis added 14 as the Lakers posted their 11th win in their last 12 games since a season-opening loss to the Los Angeles Clippers.

Atlanta was blown out in Los Angeles for the second consecutive night after losing by 49 points to the Clippers.

Tobias Harris scored 27 points to lead six Philadelphia players in double figures as the 76ers rolled to a 114-95 triumph at Cleveland.

Cameroon center Joel Embiid added 14 points for the 76ers and Australia’s Ben Simmons had 10 points and 11 assists for Philadelphia. Collin Sexton led the Cavaliers with 17 points.

With Orlando clinging to a three-point lead, Magic guard Markelle Fultz made a steal and dunk then sank a free throw with 36 seconds remaining to lift the hosts over the Washington Wizards 125-121 in a matchup of struggling Eastern Conference clubs.

Montenegrin big man Nikola Vucevic led Orlando (6-7) with 30 points and 17 rebounds while Frenchman Evan Fournier had 25 points and Fultz had a 45-game career-high 19 points for the Magic, who ended a 4-1 homestand.