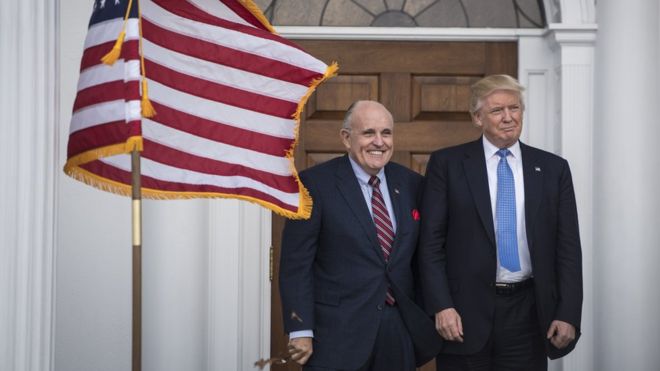 US lawmakers are investigating whether the White House tried to “manipulate” the Ukrainian government into digging up dirt on top Democrat Joe Biden.

The Democratic committee chairmen have requested records from the White House and Department of State.

The White House has not yet commented on the investigation.

Their statement said they had “demanded records relating to President Trump’s and Mr Giuliani’s attempts to manipulate the Ukrainian justice system to benefit the President’s re-election campaign and target a possible political opponent”.

They noted that Mr Trump had reportedly threatened at the end of last month to withhold more than $250m (£200m) in congressional military aid to Ukraine.

The lawmakers said their inquiry would examine whether aid was being dangled to “coerce the Ukrainian government into pursuing politically-motivated investigations… in service of President Trump’s 2020 re-election campaign”.

Similar records have been requested from the Secretary of State Mike Pompeo.

The committees have given the White House and Department of State a deadline of 16 September.