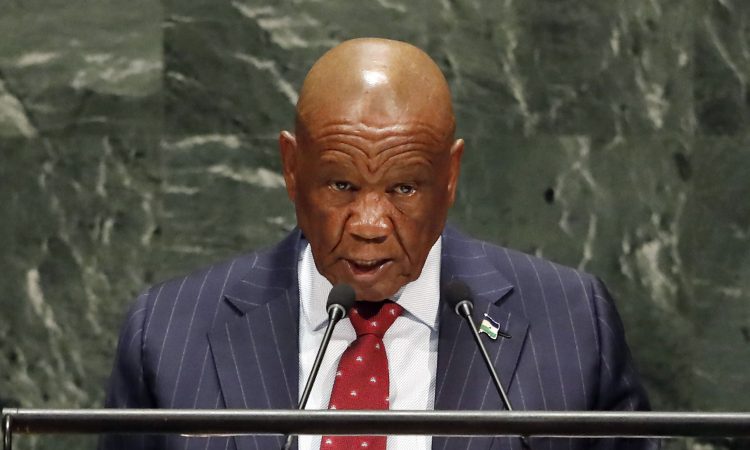 Lesotho premier Thomas Thabane failed to show up on Friday at a court where he was due to be charged with murdering his estranged wife, as his aide said he had gone to South Africa for medical checks.

The 80-year-old prime minister is accused of having acted “in common purpose” in the June 2017 killing of Lilopelo Thabane, 58, with whom he was embroiled in a bitter divorce.

She was gunned down by unknown assailants just two days before Thabane took his oath of office at a colourful ceremony in a stadium.

His current wife Maesaiah Thabane, 42, whom he married two months after Lipolelo’s death, is considered a co-conspirator and has already been charged with murder.

“The PM has still not shown up,” said Deputy Police Commissioner Palesa Mokete told a news conference after the premier failed to appear at a magistrate court in Maseru.

“He was supposed to come in person but we have since been informed that he has gone for a routine check up,” he added.

“He is not attending court, he has gone for a medical checkup in South Africa,” Thakalekoala said by phone.

Thabane left on Thursday, he said. He gave no further details and said Thabane’s return depended on medical advice.

His reported departure came the same day that police announced he was due Friday to appear before a magistrate for murder charges to be formally read out to him.

Police investigations found that communication records from the day of the murder picked up his cell phone number.

“We have a very strong case against the PM and his phone is not the only evidence that we have,” Mokete told reporters.

“There is a whole lot of other evidence,” he said.

The death shook Lesotho, a landlocked mountain of 2.2 million people that has a long history of political turmoil.

In his inaugural speech, Thabane described his wife’s murder as a “senseless killing.” He and Maesaiah — who at the time had the status of a “customary wife” — attended Lipolelo’s funeral.

On Thursday, Thabane had announced on the state broadcaster that he would quit office by July 31 due to old age.

His elected term would have come to an end in 2022.

It has been more than a decade since a prime minister served out a full five-year term in Lesotho.

Thabane had already fled the country once, when his first coalition government was marred by political bickering, which culminated in an army-led coup in August 2014.

He returned home in 2017 and successfully ran for re-election.

Analysts said that Thabane was not, technically, a fugitive from justice and may be playing for time.

“The prime minister for now, cannot be accused of having evaded justice because there is no warrant of arrest, there were no summons served on him, it was just politically expected that he would appear in court,” said Hoolo Nyane, a constitutional law professor at South Africa’s University of Limpopo.

“He might just run away like the wife did some weeks back and then hope that the matter will be solved in some way while he is hiding somewhere in South Africa,” Nyane said.