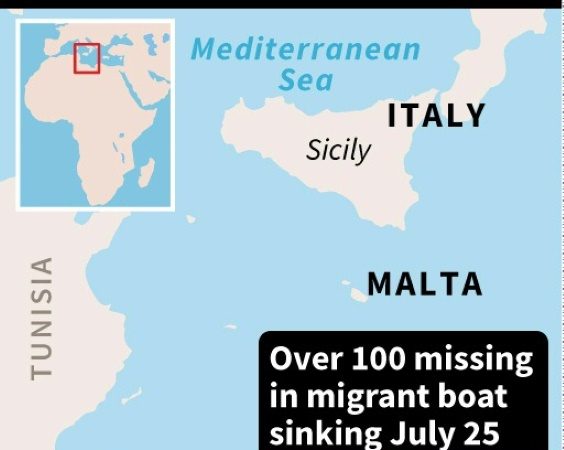 Rescue workers said Friday they had plucked the bodies of 62 migrants from waters off the Libyan coast a day after one of the deadliest shipwrecks in the Mediterranean this year.

About 145 migrants were rescued by the Libyan coastguard Thursday after their overloaded boat went down east of the capital near the port city of Khoms.

Aid agencies initially feared that scores of migrants had drowned, with the number of missing estimated at more than 110 by the International Organization for Migration (OIM), and fishermen reported the waters were full of floating bodies.

“The bodies are still floating onto the shore continuously, it’s not possible to give a total number,” he added.

Survivors reported there were some 400 people aboard when it went down, according to global charity Doctors Without Borders (MSF).

One of the fishermen who was the first on the scene to save the survivors recounted finding “bodies floating on the surface of the water where the boat went down”.

The head of the UN refugee agency Filippo Grandi called the wreck “the worst Mediterranean tragedy of this year”.

Libyan navy spokesman General Ayoub Kacem said most of the rescued migrants were from Eritrea, although Palestinians and Sudanese were also among the group waiting to be taken on to reception centres.

A member of the Libyan coast guard said the outfit did not “have the means” to launch a high seas search and would “have to wait for the sea to return the bodies so we can pick them up”.

Local authorities were gathering and storing bodies of the victims but were facing numerous problems and struggling to find burial places for them, according to municipal source in Khoms.

UN chief Antonio Guterres said he was “horrified” by the latest tragedy at sea.

“We need safe, legal routes for migrants and refugees. Every migrant searching for a better life deserves safety and dignity,” he tweeted.