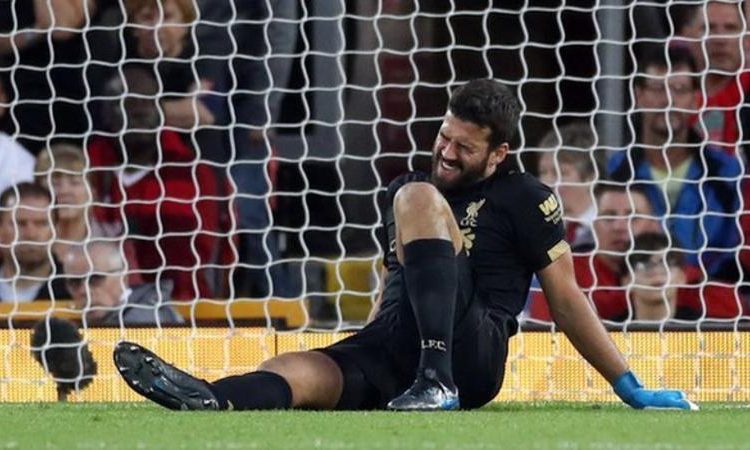 Liverpool keeper Alisson has been ruled out “for the next few weeks” with the calf injury he picked up in the season-opening win against Norwich City, says manager Jurgen Klopp.

The Brazil international, 26, went off after 39 minutes of the 4-1 victory and was replaced by summer signing Adrian.

“It’s not too cool,” said Klopp. “It’s a calf injury which takes Alisson out for a while.”

Liverpool are set to sign veteran Andy Lonergan on a short-term deal as cover.

Alisson was a key figure for the Reds in his debut season after joining from Roma, helping them win the Champions League and finish second in the Premier League.

“I don’t want to make now an exact prognosis on when he will be back – it takes a couple weeks for sure, and we have to see,” said Klopp.

“I saw already like ‘six weeks’ and stuff like this, but Ali was not a lot injured in his career so I would like to wait a little bit to see how he develops in that process now, but he is not in for the next few weeks.”

Lonergan is available on a free transfer having left Middlesbrough in the summer.

The 35-year-old initially joined the Reds during pre-season as cover when Simon Mignolet, who has since left, was their only available keeper, with Alisson on holiday following international duty and third-choice Caoimhin Kelleher not yet fully fit after a broken wrist.

Lonergan is expected to be on the bench for the Super Cup match against Chelsea in Istanbul on Wednesday.

“The situation was even more difficult a few weeks ago because of injuries, but Kelleher is now in his final steps for being completely back,” said Klopp.

“But of course we have to find a solution in the short term and that will be, if nothing happens from now to then, Andy Lonergan.

“He was in with us, he’s a brilliant character, a really nice lad and helped us a lot in the pre-season and now we decided to work together with him.”

Another back-up keeper, Kamil Grabara, is currently on a season-long loan at Championship side Huddersfield.